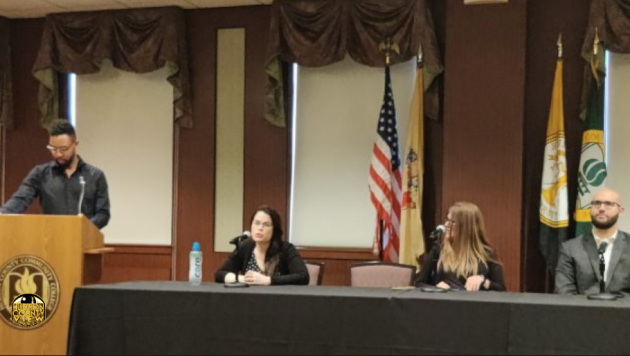 “Jersey City and Hudson County have been adversely impacted by the war on cannabis. So, I thought it right to expand the opportunity as much as possible.”

Saleh also noted that his goal is to bring six dispensaries to the Heights, specifically on Central Avenue, noting that Greenville would likely have the same number of permitted cannabis businesses.

“We are cannabis inclusive here in Jersey City. We will be doing a quarterly report that will be the state of the cannabis market in Jersey City. The mayor has said we’re going to allow as many applicants as the market will allow,” noted Bunney, also a part-time aide to Saleh.

She continued that they want the companies to succeed, while also ensuring that they give back to the community.

“New is always scary for everyone. New is especially scary for everyone not in cannabis. My board is really concerned about community impact. Part of being a good neighbor is working with your neighbors… educating them about cannabis,” Bunney stated.

“Have mercy because we are learning with you, and we are doing our best. Every meeting we’re learning more. We’re certainly learning as we go.”

In Jersey City, dispensaries must receive approval from the CCB, planning board, and city council before they can get their establishment off the ground.

“We need to have a concerted effort in terms of getting legacy market and people that have a legacy business and get legitimized. I think it should be done through intermediaries,” Saleh added.

“If the market becomes too inundated with MSOs, it’s really going to dash the hope of the people applying for equity licenses. The law was made for certain individuals that had their opportunities dashed and hope taken away. I know people in the Muslim community and they couldn’t get a job for a very long time. There’s a stigma.”

“There is a high hurdle for them to get up there. This not a small undertaking,” Saleh said.

Later, Matos explained the licensing process and the need to find a friendly pro-cannabis town. She noted that 60 percent of New Jersey towns are not in favor of cannabis establishments.

“It’s not just about making sure you fit in the zoning, but making sure your business model works in that community … Some of the prices my clients have been quoted for square footage is crazy,” Matos said.

In addition, they sought to prevent predatory agreements, she noted for Management Service Agreement and Financial Services Agreement. The state has limited the number of licensed businesses a company can invest in and limited its influence in the company.

“They go and try to maneuver from behind the scenes … It’s a mess, and it’s extremely hard to monitor,” Matos said of many cannabis corporations.

Saleh noted the geographic restrictions are burdensome for companies trying to open in the Heights, and for that reason, the council may rezone Summit Avenue to allow for more cannabis businesses.

“I think we need time. I know everyone is clamoring to get through the door and get approved. We need time and patience,” he explained, noting that there is still a fair amount of opposition to overcome.

Furthermore, Saleh recalled that he was a security guard at Rutgers and the problems he faced stemmed from alcohol abuse.

“Everyone who smoked cannabis was the chilliest person on the planet: we need to bring this into the light,” he said.

“We need time. We need education. We need mercy. We have one opportunity to do this well and be an example,” added Bunney.

“Alcohol has been a part of our lives so long legally people don’t think of it anymore,” also indicating that the need to end the cultural stigma is the biggest issue.

“We’re still a long way to dispensary opening in Jersey City,” she said.

They smoke in front of your door right now,” Matos said to common complaints. “The children are already buying pot in the street. This is one of the most secure facilities you’ll ever see.”

Bunney noted in California and Oregon, while legalization was initially very controversial, it has become more accepted over time.

North Bergen schools planning to welcome students back to the classroom...