The Jersey City Council may consider using condemnation at the 6th Street Embankment, the six-block downtown site that’s been a point of contention for decades. 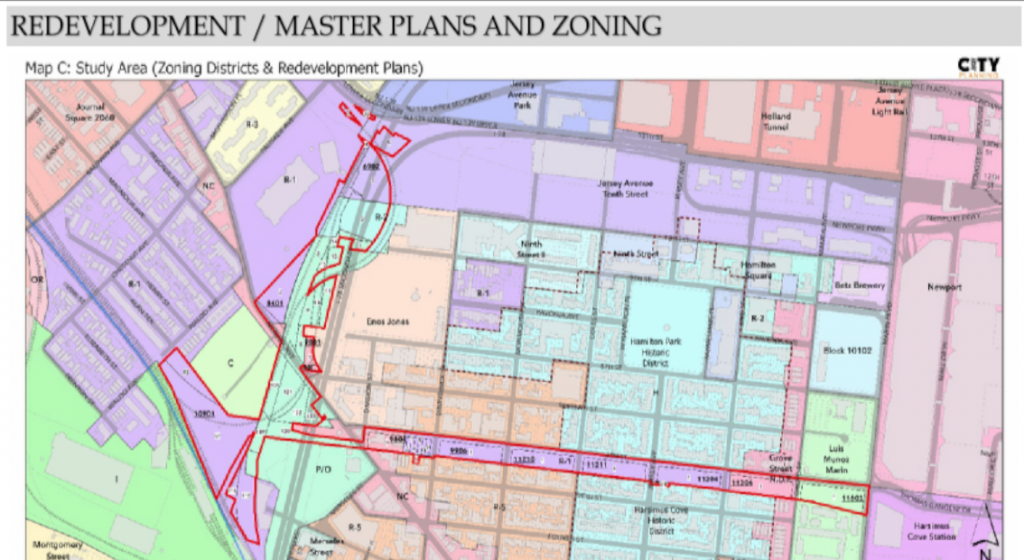 Planning Division Director Tanya Marione explained at today’s council caucus meeting that the planning board reviewed a study of the area and noted that condemnation was incorporated into it.

“This is a result of the planning board’s recommendation, which is to declare the area in need of designation. There are no plans attached to this. It’s just going through legal criteria in the local redevelopment housing.”

She said it was critical to connect these properties for one seamless plan to act on when the embankment property is transferred legally and properly.

“This establishes it as an area in need of redevelopment without condemnation, or you said there’s a sister resolution?,” asked Councilman-at-Large Rolando Lavarro.

Marione noted that only one block at the end of 6th and Division Streets has title issues where condemnation may need to be invoked.

“That’s the property that’s being studied and designated with condemnation,” she clarified.

“What’s the distinction between properties declared in condemnation and not?,” Lavarro asked.

Marione said it gives the city the possibility to later invoke eminent domain to gain control of the property.

“What criteria went to into going into determining that property was condemnable versus the others?,”  he continued.

Marione explained that developer Steve Hyman had bought the property from Conrail back in 200 and the city is now asking the federal Surface Transportation Board, who are meeting on Friday, claiming that the sale of a historic site violates preservation rules.

Hyman passed way in June 2019 and the property is now owned by his widow Victoria.

“Is that a separate resolution?,” Lavarro asked regarding the resolution invoking condemnation on Block 7.

“It has to be added. It’s that the one that you’re speaking about, Tanya?,” Council President Joyce Watterman asked.

Marione noted that there were technical issues adding the resolution with the condemnation to the agenda.

“It has all the approvals, councilman. I think the issue here was that because this and the other one is so similar, it was treated as a duplicate, and it wasn’t processed properly,” Business Administrator John Metro said.

“Will that resolution be added for Wednesday as a late item?,” Ward F Councilman Jermaine Robinson asked, to which Metro said it would be.

City Clerk Sean Gallagher noted that the council has to vote to add it as a late item to the agenda for Thursday’s 6 p.m. meeting, which will convene via Microsoft Teams.