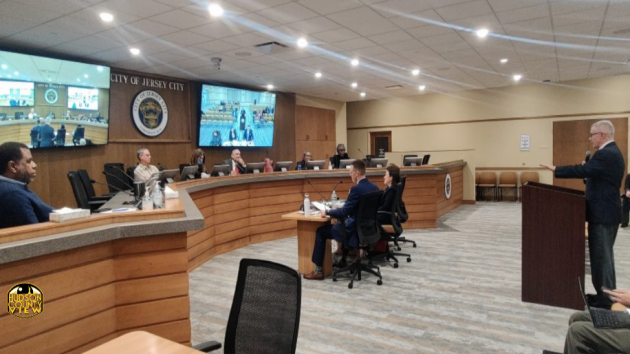 “Do not have people text us for favors,” CCB Chair Brittani Bunney said at the beginning of the meeting.

The first application heard was Legacy to Lifted dispensary, which seeks to operate at 490 West Side Ave. Attorney Mickey Weiss explained owner Christopher Broderick is a social equity applicant.

“Everyone here is from Jersey City,” he explained.

Weiss said two experts could not make it due to a case of COVID-19 and car problems, respectively.

“Are you connected to Lifted Visions? If you are … that’s going to be a problem,” Bunney stated.

“Since you represent both clients, do you want to give the board assurance?” Vice Chair Jeff Kaplowitz noted.

Weiss said there was no connection between the two, while Broderick said he was only responsible for Legacy. At the moment, he currently owns and manages a trucking company.

“I’ve been affected by the drug war severely due to my love of the plant,” he explained.

They want to work with the SCORES re-entry program to help get felons jobs after they serve their time.

Broderick said he is working with attorney Michael Hoffman to expunge records, as we as that he helped six children attend karate camp, which costs $2,200 per person.

While working with the Girls and Boys Club, Broderick recalled bringing $1,000 worth of equipment and handed them out to children.

“Do you have any other re-entry facility you’re working with?,” Commissioner Glenda Salley Perkins asked.

“To be honest, a lot of my friends are going to work with me,” Broderick said, further stating many are ex-offenders.

“Can you talk about your social impact? You’ve talked about giving money. But a bit more?,” Sloane continued.

He replied that they would hold expungement clinics, donate more to the Boys and Girls Club, and run community clean-ups.

Additional questioning revealed that his trucking company had been in existence since 2017, that Christopher Broderick’s brother, Edward, will be the director of operations, and that he would be willing to take training classes to get acclimated to the new job.

Weiss also noted they have an operations consultant.

United Food and Commercial Workers (UFCW) Organizing Director Hugh Giordano endorsed the business during public comment since they have signed Labor Peace Agreement (LPA), which means they will be neutral if their workers decide to form a union.

While Kaplowitz said he was ready to vote in favor, Perkins wasn’t there yet.

“I’m still a little concerned about social justice and the hiring of African Americans. You just haven’t given me enough,” she said.

“I don’t think there’s been any relevant discussion as to how your experience will apply to cannabis,” Bunney added.

“How are you going to operate?,” Sloane asked, prompting Kaplowitz to ask if they wanted to come back with their experts.

“A lot of the business stuff is getting lost now. Everyone wants to talk about all the charitable things they did,” Bunney interjected.

Eventually, their application was unanimously tabled (5-0) so that their consultants could way in, with the same action being taken for Lifted Visions, for the same reason.

Brett D’Alessandro, a retired Marine Corps Sergeant, is the owner of the micro-license applicant Golden Door Dispensary at 638 Newark Ave. He currently runs the non-profit “Backpacks for Life” to help homeless veterans.

“I went through a tremendous amount of adversity. I went to the VA, and I was over-prescribed medication. I lost 20 pounds being on cannabis in the medical marijuana program. It really saved my life,” D’Alessandro said.

He explained his special backpack helps homeless people deal with cold and other elements they encounter while trying to survive.

“A lot of amazing people just rooting me on,” D’Alessandro said about his community outreach.

He also said he works with veteran issues with the NJ Re-entry Corporation. His business plans to give two percent of their net profits to them.

“I want the people who work here to open up their own businesses. We can have thousands of dispensaries in Jersey City,” D’Alessandro said.

He also wanted to work with and help those at Hudson County Community College.

D’Alessandro noted he was one of the many applicants that lost in the 2019 medical cannabis Request for Application (RFA) that was completed in 2021 after a 29-month process.

Former Gov. Jim McGreevey, the chair of the NJ Re-entry Corporation, spoke in favor of the endeavor.

“I had the pleasure of getting to know Brett through the mayor’s office … Cannabis is recognized as a treatment therapy for those suffering from opiate use disorder.”

Furthermore, John Coyle, owns the property along with a percentage of the company, also endorsed the proposal.

The measure was approve 4-0, with Flanagan recusing herself.

The next cannabis dispensary application, Kush Klub NJ, would be at 550-560 Tonnelle Ave.

“Experience matters: This is a group that can hit the ground running,” attorney Gregg Hilzer said.

Klush Klub CEO Henok Abrah of Seattle, WA, said they have four dispensaries, two in Washington state and two in Canada. He would serve as the daily operations manager in Jersey City.

“We chose Jersey City because of the regulatory aspect of it. We thought it was friendly to cannabis,” Abrah explained.

“What is your hiring plan?,” Hilzer asked.

“Our plan is to hold a job fair locally. We’re also working with SCORES,” Abrah replied.

Kaplowitz wanted to know what the plan was for doing social programs, to which Abrah said they have budgeted funding for SCORES and planned to do the same for others.

“Can you tell me more about your relationship with Jersey City? A concern I have about these MSOs (Multi-State Operators) is you have no connection to the city,” Bunney said.

“I plan to move here. All of our stores are independently operated. I wouldn’t say we’re as big as those other stores,” Abrah responded.

“How many times have you traveled from Washington to Jersey City?,” CCB attorney Ron Mondello asked.

Abrah said he had visited a few times over the last three months to secure property.

Flanagan then questioned if they did not plan on giving back to the community until they were forced.

“We do food drives and clothing drives. It’s never been a requirement, and it’s something we genuinely care about. I get how it could sound,” Abrah noted.

Perkins was dismayed by the fact that applicants continue showing up and touting SCORES as their nonprofit partner, given the number of local groups that are available.

“It’s not coming from the goodness of your heart. My question was, what is your connection to Jersey City? There’s no soul in that answer,” Bunney pressed.

Jeffrey Middleton, of North Bergen, was the five percent minimum required local owner. He said he wanted to support a 100 percent Black-owned business. Middleton said they would have about 20 to 25 employees.

“I’m wondering how SCORES has all these candidates. What people want to hear is about you will put down roots,” Flanagan stated.

Prior to the vote, Giordano also endorsed Kush Klub since they signed an LPA.

“I still don’t think there’s a real connection to Jersey City other than the ability to profit off Jersey City,” Bunney stated.

Sloane defended them and said they could learn more and would invest in the company, while Kaplowitz was impressed they were one of the first dispensaries to open in Washington.

“If I wanted to open a business … I would immerse myself in that place: This is becoming everything we intended it not to be,” Bunney contended.

“It feels like pay-to-play. We didn’t create that, that area is completely blighted,” Sloan responded.

The application was ultimately approved 3-2, with Bunney and Flanagan voting no.

The final application was the Community Wellness Center of NJ for 220 Broadway. Their attorney, Mike McQueeny, said they won a 2019 RFA medical cannabis license last year and would like adult-use cannabis approval.

“Our goal was really to be from New Jersey by New Jersey,” company Chairman Jonathan Bednarsh, of Rumson, said.

He said it was 98 percent locally owned. There are two minority owners, with one percent a piece, who live in Colorado and Maryland.

“Community impact has been at the core of our mission. We’ve developed deep ties here. We’ve gotten involved in a number of programs,” Bednarsh added.

Additionally, co-owner Adam Hershey stressed their New Jersey roots and desire to give back and wanted to do so before it was required, either on the state or local level.

Giordano gave his third and final endorsement of the night before the board approved the application unanimously (5-0).