The Jersey City Board of Education held a public hearing on their preliminary $814,051,708 budget for the 2021-2022 scholastic year, with every speaker called on the board to approve a fully funded budget when it’s time to vote. 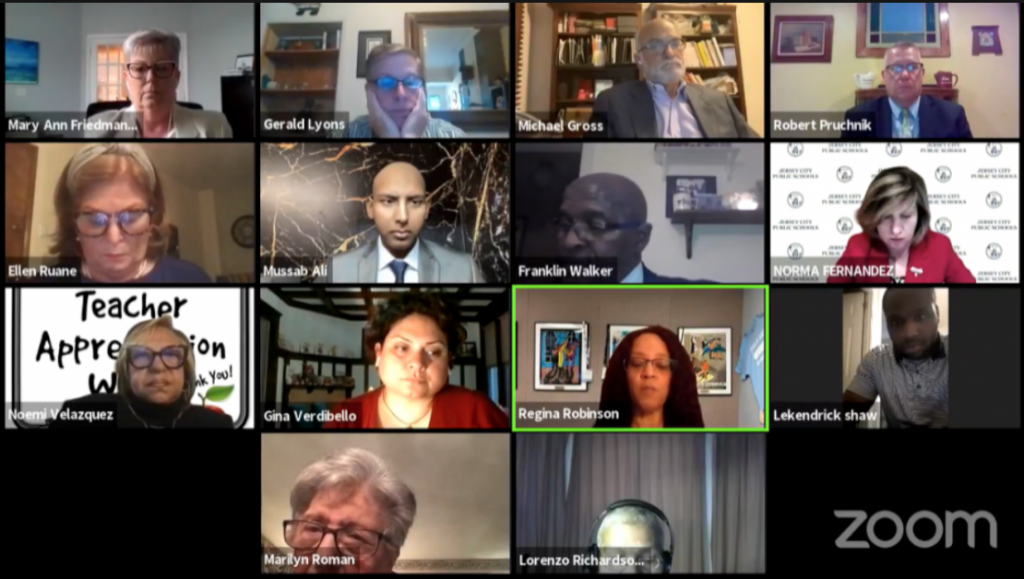 “Mr. Walker has put a full budget on the table, and I am asking you to please approve it. It’s time to fully fund our schools and do more with more,” said Amy de Jong

“With 61 percent of the district’s children eligible for free and reduced lunch, you must plan for the long-term sustainable funding of our district as we come out of this pandemic. The education of our Jersey City children can be thought of and planned for beyond the current year. We need sustainable funding that will ensure the hiring of full-time teachers,” expressed Evelyn Gormley.

Back in March, the board narrowly approved their preliminary budget by a tally of 5-4 after making several amendments on the fly, which notably dropped the tax levy from $100 million to $85 million and brought the annual tax increase down to $996 from $1,168.

Since then, BOE trustees met with members of the city council on how to address their lingering school funding crisis, but without an immediate solution on the table, the school district will likely have to figure out this budget without any additional state or federal aid.

“The crucial proposed investment in the budget are necessary for Jersey City Public Schools to be able to provide a thorough and efficient education to all of its students,” Meghan Howard Noveck, a parent and member of Jersey City Together, said.

“What is included in this budget that students in Jersey City don’t deserve? We have perpetuated a deeply inequitable system.”

She also spoke about elementary school classrooms being overcrowded, which was a topic brought up by several other parents.

“My daughter’s school is severely, severely overcrowded. 30 kids in the classroom is really too many,” stated Jessica Taube, who later noted professionals needed to be paid full-time salaries instead of per diem wages.

“I don’t think school funding should be treated as a bargaining chip. It’s not a carrot to be dangled in front of our kids. School funding is be villainized by a mayor who only speaks about or schools when he’s bashing them,” added Nancy Pokler, another Jersey City Together member and parent.

“Communities that invest in schools thrive. Jersey City is not yet thriving, but it can be. If Jersey City is to thrive, it will be through a thriving fully-funded public school system that supports schools from Greenville to the Heights and Westside to Downtown,” said Brigid D’Souza, another parent and member of Jersey City Together.

After the public portion, Superintendent of Schools Franklin Walker weighed in on the district’s upcoming spending plan.

“For the first time in over 10 years, we have close to a fully-funded budget in line with the state funding guidelines,” he began.

“It is a budget of equity that provides 30,000 students enrolled in the Jersey City Public Schools with a sustainable education that meets their admitted needs and long-term needs … The district still lacks revenue and budget stability, which adds fiscal uncertainty when added to the pandemic’s impact.”

Walker also called on the city to do more for their schools, but of course it’s up to them to decide how they want to allocate their budget dollars.

“Some beautification projects can wait for a better time instead of passing the cost onto residents,” Walker said, likely alluding to the Newark Avenue Pedestrian Plaza upgrades that cost $6.7 million.

Other potential financial problems include the BOE certifying only $65 million from the city’s payroll tax, despite initially expecting $86 million.

Walker also noted that while they are expecting some federal stimulus money, those funds can’t be used to balance the budget.

“Everyone is searching for the same answer,” Board Counsel Michael Gross said, explaining that the state has not provided any guidance on this topic yet.

The Jersey City BOE’s final vote on the budget is expected next week, with the trustees and council members again scheduled to meet this evening.