The East Newark Senior Center was jam-packed with supporters – including the legislators of the 32nd Legislative District – as newly-elected Mayor Dina Grilo took the oath of office alongside Councilwoman Jessica Diaz and Councilman Charles Tighe. 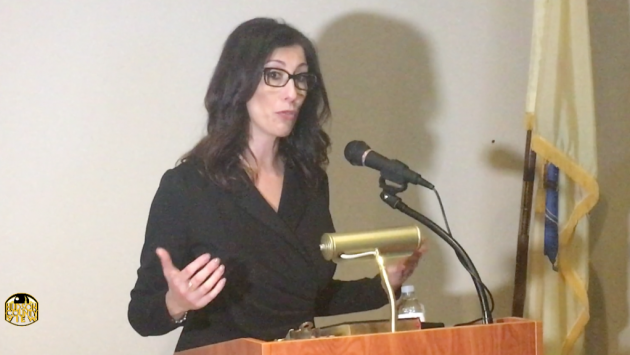 Grilo, who kept her remarks short and sweet, expressed gratitude to her supporters.

“I just wanted to say thank you to everyone who came out, and to several of you who I know through life and my career who came from far away,” Grilo stated.

“To those of you who encouraged me to take this journey, thank you, and here I am. I’ll be counting on you. Very briefly, a big thank you to our DPW, our police department, and our fire department. We are a very small borough, but we have a really big heart when it comes to coming together.”

All three East Newark officials were sworn in by state legislators. The oath of office was administered to Grilo by state Senator Nick Sacco, to Diaz by Assemblywoman Angelica Jimenez, and to Tighe by Assemblyman Pedro Mejia.

The ceremony was one of the most high-profile political events that the sleepy 0.123-square-mile borough, with an estimated population of 2,406, has seen in many years.

In a contested primary election, Grilo pulled off what was considered by observers to be an upset victory against former Mayor Joseph Smith, who at that point was the longest-sitting mayor still serving in Hudson County since he was elected 32 years prior in 1987.

Smith, an eight-term incumbent who hadn’t faced an opponent for 16 years prior to Grilo, was defeated by a margin of just a few dozen votes, in an election which saw 47 percent of East Newark residents at the polls.

Grilo is the first woman to serve as mayor of East Newark, and is the second woman to ever win a mayoral election in Hudson County.

She is a lifelong East Newark resident, and a first-generation American whose parents immigrated to East Newark from Portugal in the 1980s.

She currently works as the vice president for the office of disability inclusion at JP Morgan Chase & Co, and served for five years as a volunteer firefighter in East Newark’s department.

While campaigning, Grilo highlighted a number of areas of local governance that she feels ought to be improved.

She said she plans to budget for improvements to East Newark’s recreational programs and sports leagues, along with improving public parks, and wants to sway developers to build on long vacated and unproductive industrial sites in the borough.

Grilo’s platform also called for hiring additional police officers, as she cited East Newark’s municipal code which states at the borough should maintain a police department staffed with at least 10 officers total. There were only six East Newark police officers while Smith was at the helm.

Also in attendance for the ceremony was First Lady Tammy Murphy, who spoke glowingly about the change that Grilo will bring to the table.

“Serving a municipal government requires being available and accountable to everyone in a community, and we are deeply grateful in kind to Mayor [Joe] Smith who took up the mantle of public service for more than three decades,” Murphy said.

“Mayor Grilo is being elected to public office in the municipality where she grew up, and I can only imagine this must engender a higher level of motivation and investment,” Murphy continued. “Mayor Grilo is a product of this community. Her education, work ethic, and values have all been influenced by East Newark.”

Though Hudson County Democratic Organization Chairwoman Amy DeGise had endorsed Smith in the election, she offered Grilo unequivocal support in the future.

“Not only is [Grilo] a phenomenal and bold woman, but she prides herself on being from this town. Although this town may be small on the map and by the numbers, it is huge in her heart and she is going to reflect that in her entire leadership. I look forward to working with her and everyone that surrounds her.”

Sacco, whose legislative district includes East Newark, said that while he will look back fondly on Smith’s lengthy tenure, he believes that Grilo can bring some changes for East Newark residents that he believes are overdue.

“We all loved Joe Smith, and we all worked closely with him. Now, another person moves forward to make some changes that I believe the people of East Newark are looking for. I came through and saw an area that really should be developed, and certain things that should take place over time,” Sacco explained.

“Does everyone who lives here know that your school was built in 1865, when Ulysses S. Grant was president? With some help from the state, East Newark will move forward. You ran a very clean and honest campaign, and I’m very proud to start serving alongside you as mayor.”

Those at the helm from the Hudson County Schools of Technology, where Grilo graduated from in 1989, also sang her praises in a statement shortly after the swearing-in ceremony.

“Our entire district is proud of all Mayor Grilo has already accomplished and wish her continued success in her first term in office,” HCST Superintendent Amy Lin-Rodriguez said.

“Seeing our current and former students achieve success in any area of life is always one of the most rewarding feelings for anyone who works or volunteers their time in education,” added Craig Guy, HCST’s school board president and Chief of Staff to Hudson County Executive Tom DeGise.

“Mayor Grilo is an incredibly hard working woman with a passion for serving her community and we all look forward to watching her do great things for the residents of East Newark.”

HCST Board Secretary Joey Muniz served as the emcee.