Former Jersey City Board of Education President Sudhan Thomas is facing new charges, with federal prosecutors accusing him of embezzling over $45,000 from the local employment and training program during his tenure as acting executive director. 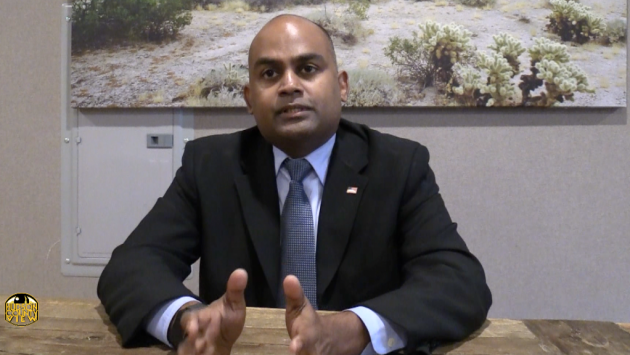 According to the criminal complaint, Thomas embezzled over $45,000 from the agency, which receives funding from the U.S. Department of Housing and Urban Development, between March and July of 2019.

Thomas served as acting executive director of JCETP for about six months between January and June of 2019, where he did not receive a salary or other compensation.

The charges allege that Thomas caused checks to be drawn from JCETP accounts that were made payable to others, but ultimately received by him.

He also embezzled JCETP funds by issuing agency checks made out to cash that Thomas either cashed himself or used to obtain bank checks that Thomas made payable to his entity, Next Glocal, which were deposited into a Next Glocal bank account that Thomas controlled, prosecutors charge.

The criminal complaint also mentions that “Individual 1” was hired as outside counsel as JCETP, identified as being the registered agent of Glocal, as well as for the Thomas Family Foundation for America, Inc.

Public records show that attorney Paul Appel, who has represented previously represented Thomas, was the registered agent of Glocal.

The complaint also asserts that “Individual 2,” a JCETP board member, was the only other person who had access to the agency bank accounts.

Sierra has since filed a whistleblower suit, where a related October court filing revealed that that there was a “current FBI investigation” at JCETP, as HCV first reported.

“The public servant who reported this was fired in retaliation by Sudhan Thomas and that great wrong has still not been righted,” said Bill Matsikoudis, Sierra’s attorney in the matter.

Authorities also allege that Thomas then used the JCETP funds deposited to Next Glocal’s bank account to pay for his personal expenses, including payments to Thomas’ landlord in Jersey City and airfare and hotel expenses for a trip to Hawaii, and to fund transfers to Thomas’ family trust account.

The count of theft from an organization receiving federal funds carries a maximum potential penalty of up to 10 years in prison and a fine of up to $250,000 or twice the gross pecuniary gain or loss.

Jersey City spokeswoman Kimberly Wallace-Scalcione said they were not surprised with the charges.

“We are not surprised with the charges today as it was the mayor and the JCEPT board leadership that submitted documents to law enforcement detailing what seemed to be discrepancies in accounting at JCEPT under Sudhan,” the statement says.

“We have always said that we will have no tolerance for corruption and when this was brought to our attention we acted immediately. We always assume people are serving for the right reasons but when those same people violate the public trust, as is alleged here, we are unforgiving with their conduct.”

Ward E Councilman James Solomon, who opposed Thomas’ re-election to the board of education (where he lost) in November, said he was “enraged” that monies were being misappropriated.

“To anyone paying attention, these charges are no surprise. I’m enraged that money was allegedly stolen from our city’s most vulnerable residents by a ‘public servant,'” Solomon said.

“Significantly greater oversight of JCETP is needed by the City Council as soon as possible. I’m eager to work with my colleagues Councilpeople Watterman, Lavarro, and Robinson who have been pushing for these reforms.”

“On May 31, 2019 a comprehensive forensic audit that confirmed the extent of McGreevey’s embezzlement was presented to the JCETP board. The initial findings pointed to a misappropriation of $5.1 Million by McGreevey,” Thomas wrote.

“Following the historic patterns of cost per client at $2,000 per client, McGreevey’s theft impacted over 2,500 citizens of Jersey City who are underemployed or unemployed in just one year.”

McGreevey and Thomas, who played a significant role in the former governor’s ouster, had traded shots for a significant portion of 2019 over who had left JCETP in financial ruin.

Clearly, the U.S. Attorney’s Office believes it was Thomas, based on the charges they filed today and announced at 9:11 p.m.

Thomas is already facing charges from the state AG’s office, being accused of accepting $35,000 in cash bribes as part of a corruption sting revealed on December 19th. He has already vowed to fight those charges.

On Saturday, Thomas stated that he is “the biggest game in town” for unearthing financial improprieties, doubling down on the forensic audit’s findings and also proclaiming his innocence.

“I realize I am the biggest game in town for all the unearthing of financial improprieties, patronage and nepotism through my work there past 3 years across multiple agencies … I will fight each one of these charges and prevail in proving my innocence,” he said.

“The citizens should ask the all important question as to why well documented evidence of multi millions of public dollars misappropriated by the likes of McGreevey, under-taxation of builders are being ignored while I am being continuously harassed with charges. This is no sprint and I am hunkered down for the marathon.”

Editor’s note: This story was updated with a comment from Sudhan Thomas.

Police: Jersey City man appears to jump to his death from...