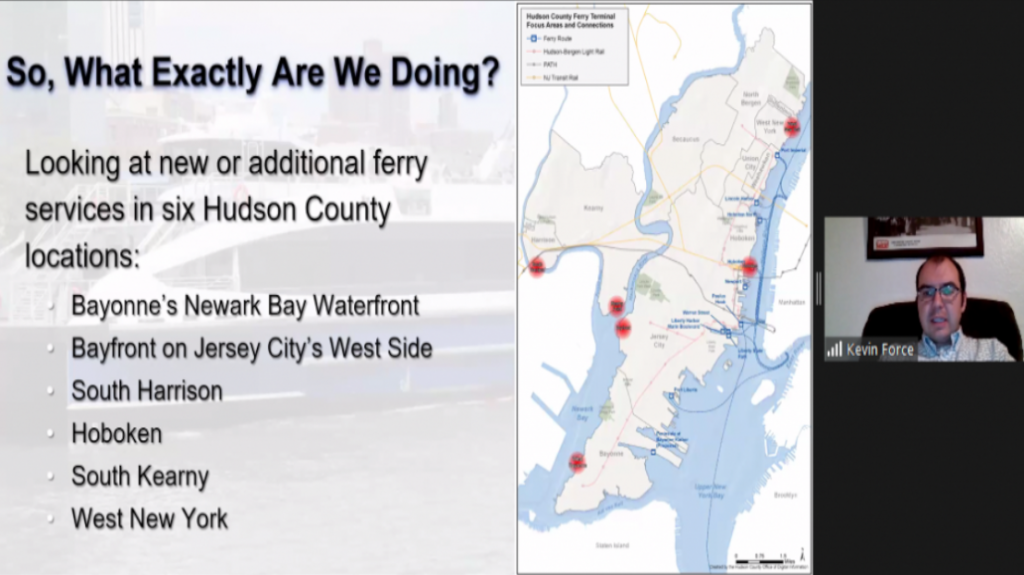 Kevin Force, the principal planner at the Hudson County Division of Planning and the project manager for the ferry expansion study, explained they are in the preliminary stages of the project.

He said they are looking at new or increased service at the Bayonne Newark Bay Waterfront, the Bayfront on Jersey City’s West Side, South Harrison, West New York, South Kearney, and Hoboken.

Bayonne has had a ferry service project in the works for years and the Port Authority of New York and New Jersey approved a 10-year land lease related to the endeavor back in February.

Force explained that the county received a grant from the and the North Jersey Transportation Planning Authority (NJTPA) to study the issue.

The NJTPA studies the transportation of 13 counties in New Jersey, including Hudson.

Consultants have been brought on to study the issue, including Fitzgerald and Halliday, GGES, Steer, and The McClaren Group. They need to analyze data of travel patterns and determine interest in ferry service.

They are eager for public input on the issue, which was solicited on last night’s Zoom call.

Rob Napiorksi said the light rail is crowded in Bayonne and the bus is inconsistent, so the option to take a ferry would be a welcome change.

“I live in downtown and would take the light rail. There would be a crush of people …There needs to be a better connection to bus service,” he said.

“We did see lots of congestion on some of our routers before the pandemic, so we want to take a look at different options people can take,” Force replied.

Stephanie Hagans, a Jersey City resident, said that a ferry would be welcome so that she could easily bring her bike into NYC.

“It’s such a quick way to get to Manhattan from Jersey City. Additionally, I like to take my bike to the city. which the path is too crowded for,” she explained.

She said there is a need for a ferry to go to the East Side of midtown Manhattan since many ferry commuters work there.

“Having a ferry as an option is wonderful. There are two barriers for me: One, it is difficult to get to the ferry easily via public transportation. Are there any plans in the works to help commuters get to the ferry? I live in McGinley Square,” began Janine Paolucci.

“Two is cost. It can be a bit expensive to take a ferry two times a day, five days a week. Any thoughts on making ferry service more affordable?”

Force said both those points have been taken into consideration.

“Service just by itself isolated doesn’t help too much. We’re certainly aware of the costs of different transportation modes and going to be considering that.”

While the focal point of the conversation was about ferries, other options were also briefly discussed.

“Jitneys might benefit certain populations,” said Byron Nicholas, a supervising transportation planner at Hudson County Office of Engineering. He also noted that the Via vans could work as well.

Another local resident Stephanie Brooks said they need to do something to alleviate the PATH volume caused by downtown development.

“One thing we want to consider is integrating our region between New Jersey and New York there are definitely connections that have not been made,” Force said.