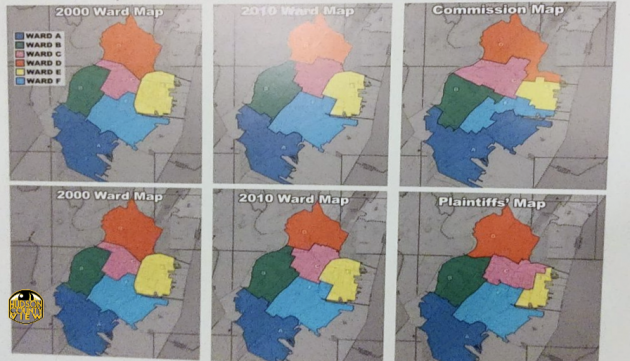 Turula explained the plaintiffs arguments and dismissed them one by one, beginning by noting that “compactness is an elusive concept.”

He said the new map better-balanced population deviations than the previous map, which was a goal of the redistricting commission.

“The new wards are compact … There is no requirement that the ward be rectangular or square,” Turula said.

He said the shape of the new Ward F district was sufficiently compact and that the district being “L” shaped was possible. Regarding an equal protection claim Turula said, “The plaintiffs… failed to provide New Jersey case law to support their claims.”

Additionally, Turula was also not persuaded that a historically Black neighborhood of Bergen-Lafayette was broken up. He said that in the last Census, Ward F was found to be 43 percent Black and the number only decreased to 39 percent this time around.

He also pointed out that the Historic Paulus Hook neighborhood was also split. Turula noted that they said that Ward F was united in their desire for affordable housing and against high rises. However, other issues could be that common among neighbors in a city.

Furthermore, Turula didn’t think the redistricting commission had the motivation to retaliate against Gilmore, which the plaintiffs had argued in court previously.

Turula explained the plaintiff’s argument that the redistricting commission violated the Open Public Meetings Act (OPA). However, he noted that they did not cite specific details about a secret meeting and thus dismissed it

“The plaintiffs failed to provide a single date of these meetings,” he said as part of the ruling.

Jason Orlando, counsel for the defendants, declined to comment on the victory.

“I live in Jersey City, and I live in Hudson County; nothing surprises me. I was pretty optimistic we were moving away from the systematic suppression of the people’s and the people’s voice. But this is yet another instance in which justice is being delayed,” Ward F Councilman Frank “Educational” Gilmore, a plaintiff, told HCV.

“We’ll be back stronger, and we’ll be tougher. It’s simply a delay. These judges are political appointments, and some people owe favors, and some decisions are indicative of those behaviors. It is what it is. I don’t take it personal. There’s possible some plans to appeal. We’ll sit down with the team, and then we’ll decide where we go from there. We’re not ruling anything out.”

He continued that the case isn’t primarily about him, it’s about “injustice being done” with the ward maps being done improperly.

Chris Gadsden, who supported the plaintiffs, noted that their lawsuit was unprecedented, making it difficult for their lawyers to cite New Jersey case law.

“It has never been done in the state of New Jersey. It’s a little disappointing, but we’ll see what our next steps are. It’s something that’s never been challenged before,” he said.

The ward maps were approved at a Saturday morning meeting in January after three hours of public comment against them and the lawsuit was filed in March.

“Today the court made it clear that the ward map is unquestionably fair, despite attempts from the usual naysayers with their baseless lawsuits that recklessly tried to mislead the public and cause rifts in our community,” Mayor Steven Fulop said in a statement.

“The judge carefully considered and dismissed all of the plaintiff’s arguments, which is a good outcome for residents as we can all now continue focusing on the important work of moving all of Jersey City forward.”

Jimenez, McKeon backing amendment to move legislative redistricting to 2023 if...