The Hudson County Board of Commissioners discussed exiting their decades-old agreement with U.S. Immigration and Customs Enforcement (ICE), with advocates calling for no new jail contracts despite what Essex County’s plans are. 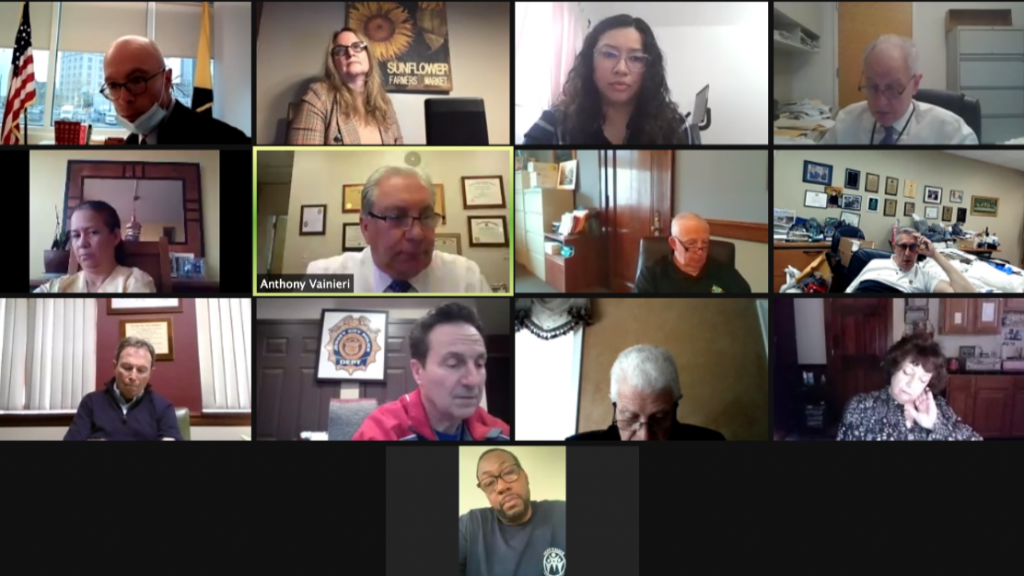 “In light of Essex County’s movement to try to get out of their ICE [contract], it’s making me change my tune on how we want to stand on this as a county, and where we go from here,” Board Chair Anthony Vainieri (D-8) said about 45 minutes into the meeting.

“I’m open to suggestions, I’m open to speaking with the county executive’s administration and our federal representatives … to find a path to exit … I’m looking to try to mirror Essex County.”

Vainieri’s comments are similar to what he told several media outlets including HCV after Essex County Executive Joe DiVincenzo announced plans to get out of their ICE deal by taking inmates from Union County, whose jail operations are mostly closing in the coming months.

County Commissioner Bill O’Dea (D-2) suggested meeting with staff from Gov. Phil Murphy’s (D) office and the New Jersey Department of Corrections to arrange a deal where state inmates in their final year of a custodial sentence could be housed in Hudson’s Kearny facility.

The offer would specifically be for inmates who qualify for a one-year, in-patient substance abuse treatment program.

O’Dea also said that Hudson is only housing 49 detainees at this time, which amounts to roughly $2 million a year in revenue.

During the public portion, where the meeting was run by Vice Chair Anthony Romano (D-5) after Vainieri left, activists made it clear that they don’t believe making more money off of incarceration is the answer.

“This contract can and should be ended without waiting for revenue from Mercer County to do it,” said Hudson County Progressive Alliance member Marc Devens.

He also pointed out that while county officials had expressed optimism in working with President Joe Biden’s (D) administration before renewing their ICE contract for up to 10 years on November 24th, “he’s shown he can’t control ICE” 100 days into his term.

Therefore, it is up to the county commissioners to take a principled stance on who they contract with, Devens stated.

“While ending the ICE contract is the right move, it won’t meaningfully change those material conditions [at the county jail] … Some sort of replacement strategy is only inviting more scandal and more harm into the community,” added Amy Torres, also of the HCPA.

Jenny Tang, of Solidarity and Mutual Aid Jersey City, was one of several other speakers who reiterated that ICE is an “immoral institution” that continues to deport people under Biden.

Several speakers also recalled that U.S. Senator Bob Menendez (D-NJ) called the contract “blood money” back in December, which drew a sharp response from Vainieri at the time.

After public portion concluded, O’Dea asked if it would be possible to use federal funding, such as the $130.41 million allocated to Hudson County from the American Rescue Plan, to offset operational deficiencies deficiencies and revenue losses from the correctional facility.

He also suggested that the board be proactive by presenting a resolution calling for the eventual closure of their county correctional facility, citing Union and Passaic Counties as examples that this may be where the state is heading.

” … Facilities like Union County closing and Passaic County considering closing … the reality is that the inmate population is declining. The State of New Jersey needs to be a leader in looking at that issue,” O’Dea explained.

Additionally, County Commissioner Al Cifelli (D-9) apologized for voting to renew the ICE contract in November, which he heavily based on a the Lawyers for the New York Immigrant Family Unity Project taking a neutral stance after being for it in 2018.

“I guess I was wrong, I guess I was a fool, I believed the attorneys and now the attorneys have pulled the rug out from under us. My vote now doesn’t have the basis that is used to have, so shame on me,” he said just before the meeting concluded after about an hour-and-a-half.

“What I’m relying on now is our good U.S. senators, especially our Hudson County senator, to make assurances that if we end this contract, they [the detainees] go home to their families … I’m counting on Senator Menendez, and to a certain extent, Senator Booker to sponsor that resolution for these men.”