Hoboken Mayor Ravi Bhalla has suspended the eminent domain proceedings on Union Dry Dock, hoping to compromise with NJ Transit and prevent them from purchasing the property at a special meeting on Wednesday.Â 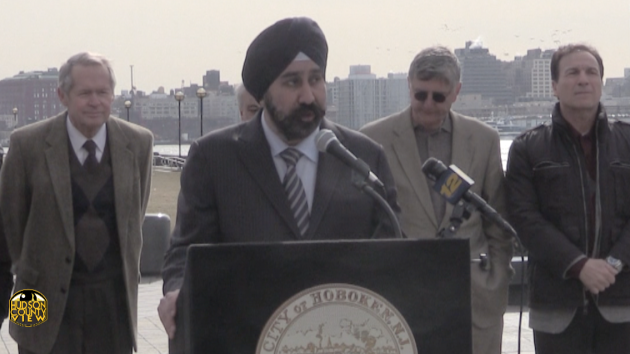 “The so-called ’emergency’ requiring a special meeting is an offer to purchase the Union Dry Dock property made by Hoboken for $11.63 million, which requested a response within 14 days,” Bhalla said in a statement.

“It was from this offer that New Jersey Transit manufactured a legal fiction and ’emergency’ rush to buy the property before the expiration of the 14-day period, based on the false claim that Hoboken would be able to lawfully exercise eminent domain immediately thereafter.”

The mayor continued that he received a letter from NJ Transit Executive Director Kevin Corbett on Saturday night, despite extending the 14-day period to 45 days, saying that the agency would need to purchase Union Dry Dock to keep New York Waterway in operations past June 1st – the date they will have to vacate their Weehawken headquarters.

To further help realize a scenario where Wednesday’s special meeting does not occur, Bhalla has since decided to cease eminent domain.

“After thoughtful consideration this weekend, I have decided to formally suspend the City of Hoboken’s legal effort to exercise eminent domain over the Union Dry Dock property in Hoboken, currently owned by New York Waterway,” Bhalla continued.

“I am taking this action so that there can be no question that an ’emergency’ no longer exists, and to allow the parties, including Hoboken, to work cooperatively towards a solution that balances all valid interests.”

Last month, the Hoboken council approved a measure to acquire Union Dry Dock from NY Waterway for $11.6 million and use eminent domain as a last resort.

Bhalla further stated that his decision was “in direct response” to Gov. Phil Murphy’s (D) proposal to withdraw eminent domain in order to cancel NJ Transit’s special meeting “to end up in the same place in finding a workable solution for everyone.”

“I am hopeful that the Wednesday meeting of New Jersey Transit will now be canceled, as such a meeting is not in accordance with the wishes of the residents of Hoboken.â€

Mahen Gunaratna, a spokesman for Murphy’s office, said the governor is also continuing to work with all interested parties to work out a compromise.

“The Governorâ€™s Office continues to coordinate with all parties involved to determine an ultimate solution that both respects the voices of the local community and the needs of one of our most vital transportation partners,” he said.

“The Governor is taking appropriate steps to make sure that commuters are not negatively impacted during efforts to find a long-term solution.â€

NJ Transit’s press office did not return a message seeking comment on whether they are considering calling off their meeting.

As of this writing, NJ Transit is still set to meet at their headquarters, One Penn Plaza East in Newark, at 2 p.m. on Wednesday.

Editor’s Note: This story was updated with a comment from Gov. Phil Murphy’s office.Â