The Hoboken City Council okayed the latest version of a Monarch settlement that will allow the city to maintain their current Department of Public Works location for up to three years, while voting down a measure that would’ve fined electeds who block constituents on social media. 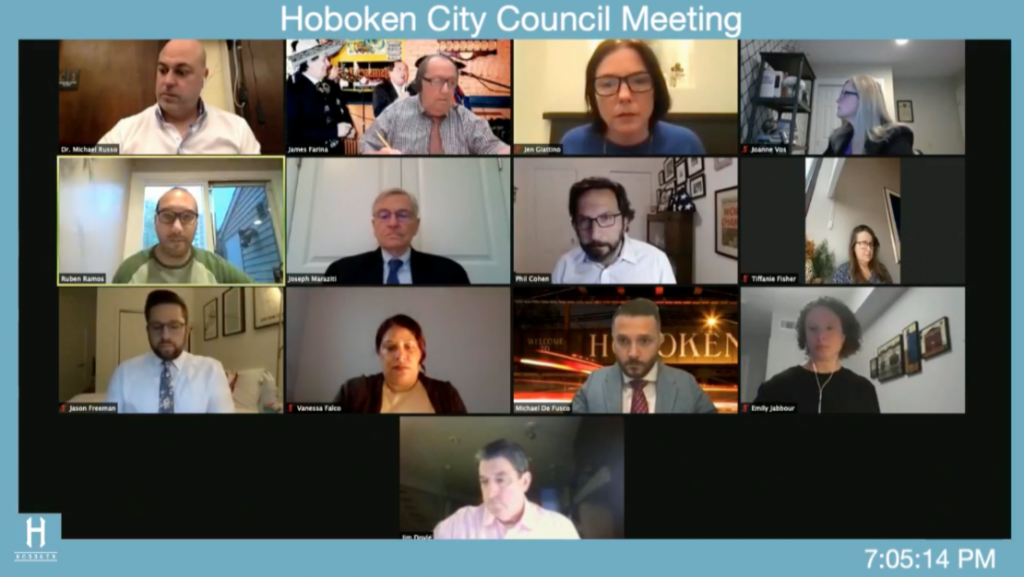 “The height of the building is a main concern that we’re having. I agree with what Councilperson DeFusco has been maintaining in the community, that idea that if we keep increasing the height of the DPW, it could then also threaten other buildings and construction around the area,” said resident Sean Iaquinto.

” … One the problems that we have in this town, I’ve been here for 26, 27 years now, is that we constantly create some type of urgency, threat ‘oh my God we’re gonna lose this project again’ because of poor planning and I see it time and again.”

Yesterday, Mayor Ravi Bhalla sent out an email advocating for the council to pass the settlement, since it comes with open space and would allow the city to stay at their current DPW location, 256 Observer Highway, through September 2024.

The city would also have a $500,000 incentive if they find a new home for their DPW garage in two years or less.

Bhalla also cautioned that Ironstate Development could potentially develop the Monarch site if the council voted the measure down.

At the meeting’s public portion, another resident, Jason Lagomarsino, pointed out that allowing Ironstate to build an additional 30 units would essentially be adding another story and making the building out of place with other structures in the neighborhood.

” … It’s going to set a bad precedent for other developers. So I just encourage the town to really make sure they take a hard look at it, with the idea that sensible development is the most important thing for the community and large, monstrous buildings are not gonna fit will within the neighborhood.”

During the council’s discussion, 1st Ward Councilman Mike DeFusco and 2nd Ward Councilwoman Tiffanie Fisher pointed out that this development currently doesn’t have a project labor agreement, with Fisher later questioning if this was truly the best deal possible for the 1st Ward.

“It clearly works for the 2nd Ward. It clearly works now for the 3rd Ward, now we have two extra years worth where we’re gonna come up with the best outcome for the 5th Ward and the 1st Ward just seems like we can spend an extra two weeks tweaking this so the project works better for the neighboring areas instead of just saying ‘the 1st Ward? those people don’t matter,'” she said.

” … Realistically, pragmatically I feel like there is cushion for us to move forward and wait two weeks to try and get more out of this with these T’s crossed and I’s dotted.”

Hoboken land use attorney Joe Maraziti said that Ironstate has been “very rigid” about the time frames in the agreement and was therefore unsure if delaying the vote was realistic.

5th Ward Councilman Phil Cohen said this seemed like a much better deal than the previous iteration, since the city was receiving not only an extension to remain at the current DPW site, but will also net $2.5 million from the developer.

DeFusco pointed out that the city ended up in this situation after losing every legal challenge opposing the Monarch project, including a hearing at the state Supreme Court, before explaining the 1st Ward’s position on this matter.

“I want to be abundantly clear that the 1st Ward is not against this project. As the councilman for the district, we are excited to come in and bring 30,000 square feet of retail, bring a world class architect to build it, and a bring a brand in the URBY brand that is hugely popular in Jersey City and Harrison – we’re proud to have it,” he began.

” … What my concern is that there hasn’t been, from the administration’s end, a response to the constant requests that I’ve had to keep the height along Park and Willow Avenue to the prevailing height of the neighborhood – which is eight stories. The only ask … is to lower the height by one story and then put the bulk over on Observer Highway.”

Later, 6th Ward Councilwoman Jen Giattino stated “I’m just not comfortable doing this without knowing that this is the best deal possible for Hoboken.”

This morning, Bhalla thanked the council members who voted in favor of the project, which will eventually move the DPW garage to a yet to be determined location in the city’s North End.

“My administration will continue to aggressively pursue this once in a lifetime opportunity to protect our waterfront while moving forward with a park on one of the few remaining parcels of undeveloped land in Hoboken. I thank the residents who made their voices heard at the council meeting, as well as the seven Councilmembers for their affirmative votes.”

As for the first reading of the ordinance to fine elected officials up to $500 for each person they block on social media, a measure that received a great deal of media attention, ended up failing 5-4.

“ … We are gratified that by our introducing this legislation, Councilman DeFusco has now ‘unblocked’ many individuals he had previously prohibited from engaging on his ‘Councilman Mike DeFusco’ social media platforms, including those who recently asked legitimate questions about his Airbnb rentals and overseas travels during the height of the COVID-19 pandemic,” Cohen and Jabbour said in a joint statement this morning.

“We strongly maintain that any official social media account which communicates about official city business must not unfairly censor individuals and infringe on First Amendment rights.”

DeFusco said on Tuesday that he had blocked a handful of people who engaged in cyber bullying and hate speech against him and his supporters, but decided to unblock them prior to the expected introduction of this ordinance.