The Hoboken fire and police union presidents told the city council “now is the time to act” on their contracts at last night’s meeting, indicating they thought they had come to terms with the administration last month. 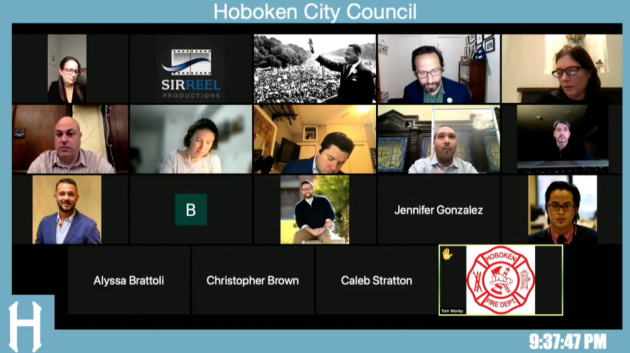 Tom Worley, the president of the Hoboken Firefighters Association Local 1078, noted that he joined the department in 2013, giving up a tenured teaching job in Jersey City.

He said he’s never regretted that decision, but added that Hoboken firefighters have been getting the short end of the stick for years.

” … Most of the people on this job have spent more than 90 percent of their career without an active contract: that’s a long time, I’ve been on for nine years,” he began.

“The same firefighters who everybody clapped for at the 7p.m. clap at the height of COVID, who have all been exposed to COVID multiple times and brought this home to our families, to our children, who have held the hands of civilians in this town while they struggled to breath. We gave them oxygen and waited for upwards of two hours for ambulances during the height of COVID.”

After highlighting other recent accomplishments of the department, such as spending four days to extinguish the flames at 38 Jackson St. last month, Worley said that they negotiated their contract through 2023 and expected a vote for past three meetings (as did the policemen’s benevolent association), to no avail.

“It’s inexcusable on your part. We’re great talking points for all you guys to hang your hats on and talk about how proud you are to have such great first responders in this town. Now is your time to actually act on those words. Three straight meetings our contracts have been pulled: you guys should be ashamed of yourselves.”

Hoboken PBA President Marc Marsi largely echoed Worley’s sentiments, though went into more detail as to what had led to the unexpected delays.

“One of the reasons we spearheaded the effort to change health insurances to the state health benefits plan is number 1, it saves the city about seven million dollars year over year and number 2, it reduces our liability in terms of the money that we pay as a contribution on our end under Chapter 78.”

Marsi questioned if it was it accurate that the council would not entertain any agreement that would involve switching union members to the state health benefits plan.

1st Ward Councilman Mike DeFusco said he’s been ready to vote on a new firefighters contract since he took his seat in 2016, also noting that a “politically connected vendor” has since been removed from the mix, referring to Fairview Insurance.

Council President Mike Russo, who sits on the city’s insurance commission, explained some of the issues at hand here.

“Just one hiccup off the top: we have a finalized contract with the PSOA who opted not to go into the state plan … We would then have to look at the legal ramifications of that to try to force them into that plan, which is a concern. And you’re fundamentally changing what they negotiated as a union.”

Russo continued that retirees at the Medicare age would be forced into the Medicare Advantage Plan, which he called “a far inferior plan” to what the city offers today.

DeFusco then asked Business Administrator Freeman why Worley thought the council had been pulling the contract from their agendas since he was unaware of that happening to date.

“In full transparency, I’m not gonna let the city council fall on that sword, that’s not necessarily the right way to kind of phrase this,” he explained.

” … The last thing that anyone wants to do is go into an agreement with the best of intentions and then realize that there is an issue related to a retiree. Or to city council members not being covered under insurance. Or active employees not having the same benefits as retirees. So those are the few remaining components of the health benefits piece.”

The council took no formal action on either contract at last night’s meeting.