As they did earlier this month, the majority of the Hoboken City Council voted down a budget amendment proposed by 2nd Ward Councilwoman Tiffanie Fisher last night. 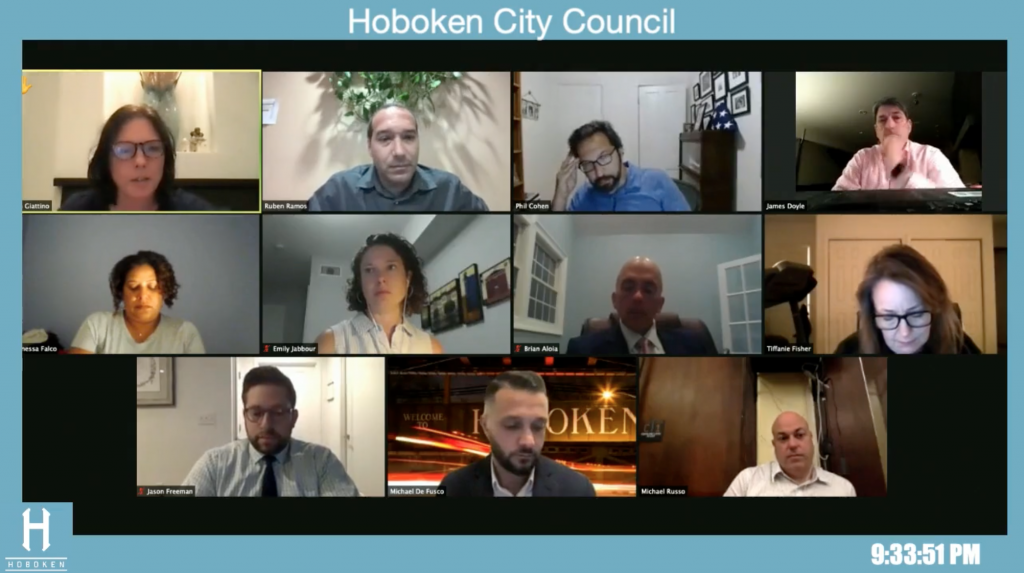 The vote occurred about 15 minutes into the meeting after some brief verbal sparring, failing by a tally of 5-4, with Council members Mike Russo, Phil Cohen, Vanessa Falco, Emily Jabbour, and Jim Doyle voting no.

The vote and discussion prior to it were not saved on the city’s Zoom recording of the meeting that is now available on their Facebook page, though some parting shots remain on full display.

” … To say that the finance committee is doing everything they can to move this forward … what the finance committee is doing is working on a schedule that they’re comfortably delaying the review of the budget: that’s not okay with me, I don’t think that’s right for the public,” 2nd Ward Councilwoman Tiffanie Fisher, the resolution sponsor, said at last night’s meeting.

Councilwoman-at-Large Emily Jabbour, who previously told HCV she voted down Fisher’s prior proposal since she wasn’t convinced it wouldn’t negatively impact day-to-day operations, again disagreed with her colleague.

“Believe me, I’m not interested in any of this back and forth, what I would like to point out is that the state has not actually reviewed or approved the introduced budget yet. The idea that we would be able to move forward on this and have the state actually get back to us is not gonna happen soon.”

She added that guidance from the state has been crucial this year so that municipalities can receive guidance on how they can use federal COVID-19 relief funds.

The council approved the first reading of a roughly $125 million budget, which includes $7 million from the American Rescue Plan, with no tax increase introduced by the administration back on April 7th.

Additionally, Jabbour and Doyle had proposed an ordinance preventing short-term rentals at rent-controlled buildings, which was panned by four of their colleagues, though it was pulled from the agenda rather than calling a vote on first reading.

” … We have agreed to table the proposal and we hope to reintroduce an amended version of it at a future council meeting, and we look forward to having the support of our colleagues,” Doyle, Jabbour, and Falco said in a joint statement this morning.

“To that end, we also support adding resources to our rent leveling office to ensure policies such as this one can be adequately regulated and enforced.”

City of Bayonne to unveil memorial that marks 20th anniversary of...