Hoboken officials gathered today to tout the expansion of the Southwest Resiliency Park with the temporary Block 10 pop-up park now in the works. 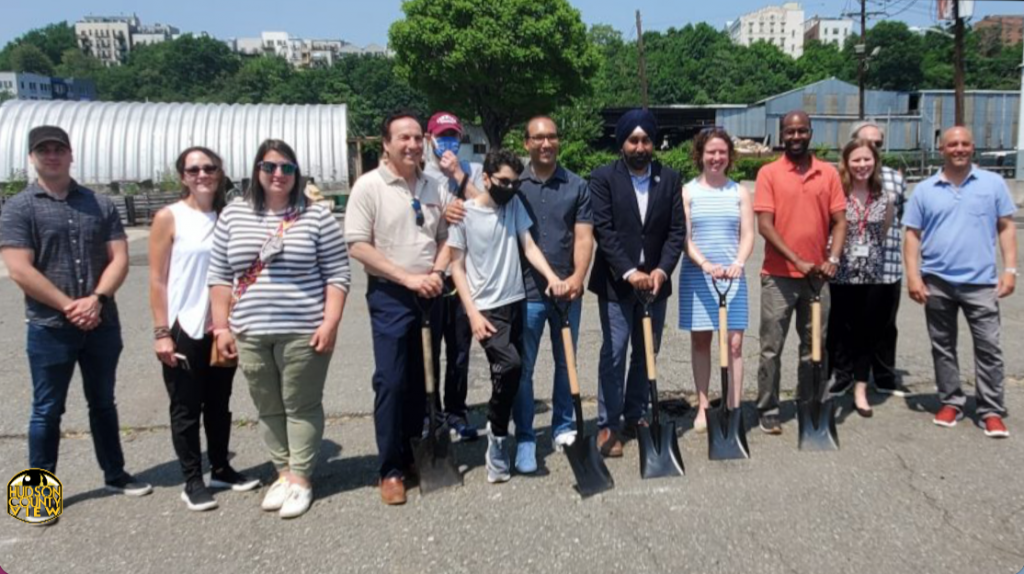 Opening in mid-July, the pop-up park will sit on an acre of land on Harrison Street right across from the Southwest Resiliency Park, which will double in size as a result of the expansion.

“This is a historic day for Hoboken … This is a continuation of the expansion of our open space inventory in Hoboken,” Mayor Ravi Bhalla said.

“That’s a great thing when we can look to somebody on the other side of the negotiating table and avoid the courts,” the mayor said.

4th Ward Councilman Ruben Ramos noted the city initially had a hostile relationship with Academy, but they came to an agreement after a mediator assisted them.

Bhalla recognized Ramos for his assistance in helping to create the park.

Ramos also noted he began the pushing for a park in 2006 when Mayor David Roberts was in office.

“When I was a young police officer, this was a desolate, unsafe, dirty area,” Romano recalled, expressing great satisfaction about the turn around.

He noted the county’s open space trust fund facilitated the process of the creation of the pop-up park.

Furthermore, Councilwoman-at-Large Emily Jabbour said the first time she spoke at a council meeting in 2017, debating the use of eminent domain to acquire the property was being debated.

“While I wasn’t living in that immediate neighborhood, I knew the importance of acquiring this property to ensure that all Hoboken residents would have the benefit of open space. Urban open spaces have tremendous benefits for our community, which has become all the more apparent during the COVID-19 pandemic.”

Both Jabbour and Bhalla also commended former Mayor Dawn Zimmer for getting this project off the ground.

“The expansion of the Southwest Park is great news for the Fourth Ward and all of Hoboken. Thank you to Mayor Bhalla for ensuring this larger park. The transformation of Western Hoboken over the past decade through the acquisition of over 10 acres of new park space has been truly amazing,” Zimmer said in a statement this afternoon.

“As the buildings that you see around grow… the open space in between here becomes even more valuable,” he said today.