After nearly a month of political jousting in Hoboken that has become standard procedure, the city council voted to override the mayor’s veto of an ordinance that will abolish the Office of Constituent Affairs. 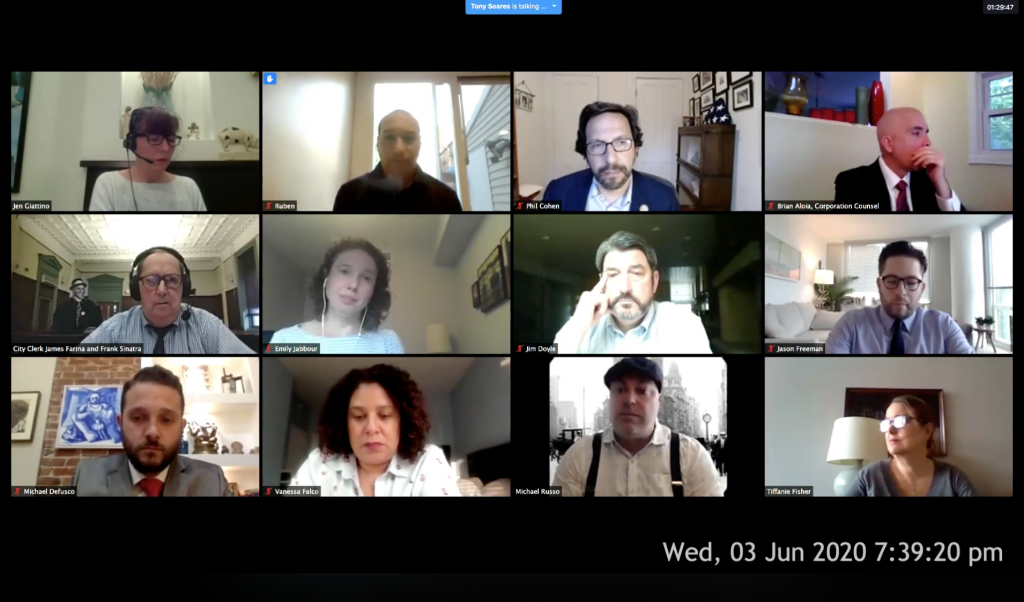 “I still have concerns over what the sponsors of this ordinance are aiming to achieve and so I would just call on my colleagues to better articulate – coming out of the discussions we’ve already had – what this accomplishes,” Councilwoman-at-Large Emily Jabbour said during last night’s council meeting, which was once again hosted on Zoom.

” … So this accomplishes firing … ?,” Jabbour continued.

“This accomplishes a reduction in spending. It’s up to the mayor to fire or not fire, we went over that at the last council meeting. Remember, Councilman Russo asked that question: can the council fire someone? It’s a matter of appropriations of what he wants to prioritize,” Ramos added.

Councilman-at-Large James Doyle weighed in as well, noting that in order for there to be less spending, there needs to be fewer employees, prompting Council President Jen Giattino to state that lowering salaries was also a possibility.

Furthermore, 2nd Ward Councilwoman Tiffanie Fisher explained that from her vantage point, the mayor’s office always has to provide constituent services no matter what, so the department in question does not provide any new or added benefits.

“No matter what, constituents call City Hall, and the staff within City Hall have to provide this and it’s up to the mayor to decide who is best positioned to do that within the budget he’s allowed to have.”

Hoping to put an end to the great debate, Russo asked Corporation Counsel Brian Aloia if the city council had the statutory authority to fire employees.

“In this case, this ordinance does not fire anyone, as indicated by both Councilwoman Fisher and Councilman [Ramos],” Aloia said.

“If the plan isn’t to fire anyone, then this reduces the bottom line, which by extension, reduces head count?,” Jabbour pressed on.

He also noted that he’s been consistent, voting no on other expenditures including payment of claims and emergency appropriations.

Ramos further stated that he was the sponsor to bring back the Office of Constituent Affairs back in 2018, but due to budgetary woes – estimated to be anywhere from $10 to $20 million prior to the introduction of this year’s spending plan – the city can no longer afford it.

The override was approved by the same vote that cleared ordinance on both first and second reading, 6-3, with 5th Ward Councilman Phil Cohen, Jabbour, and Doyle voting no.

While Mayor Ravi Bhalla vowed to veto the measure, which he did on Friday of last week, that move ultimately proved be inconsequential.

This is the second time in three attempts that the city council has overrode a veto by Bhalla.

The governing body successfully did an override in 2018, allowing a runoff referendum to appear on the November ballot (which passed easily), though they were a vote shy last yearÂ when they tried to limit the number of non-civil service employees in the mayorâ€™s office.

A city spokesman declined to comment on the override, but pointed to Bhalla’s statement from May 21st that said the Office of Constituent Affairs has assisted over 1,000 residents during COVID-19 – such as by deploying a team of 250 volunteers to feed 900 seniors.

Three sources, who spoke under the condition of anonymity since they were not authorized to speak on the matter, indicated that Caroline Caulfield, the head of the Office of Constituent Affairs, is expected to depart City Hall no later than the end of the month.

However, the other employee in that office, Migdalia Pagan-Milano, who unsuccessfully ran against 1st Ward Councilman Mike DeFusco in November, is likely to remain at City Hall – at least for the moment, sources said.