While it briefly appeared that Jersey City Mayor Steven Fulop, and possibly state Senator Brian Stack (D-33), were going engage in a public battle with Hoboken Mayor Ravi Bhalla over the Western Edge Redevelopment plan, it looks like cooler heads have prevailed – at least for now. 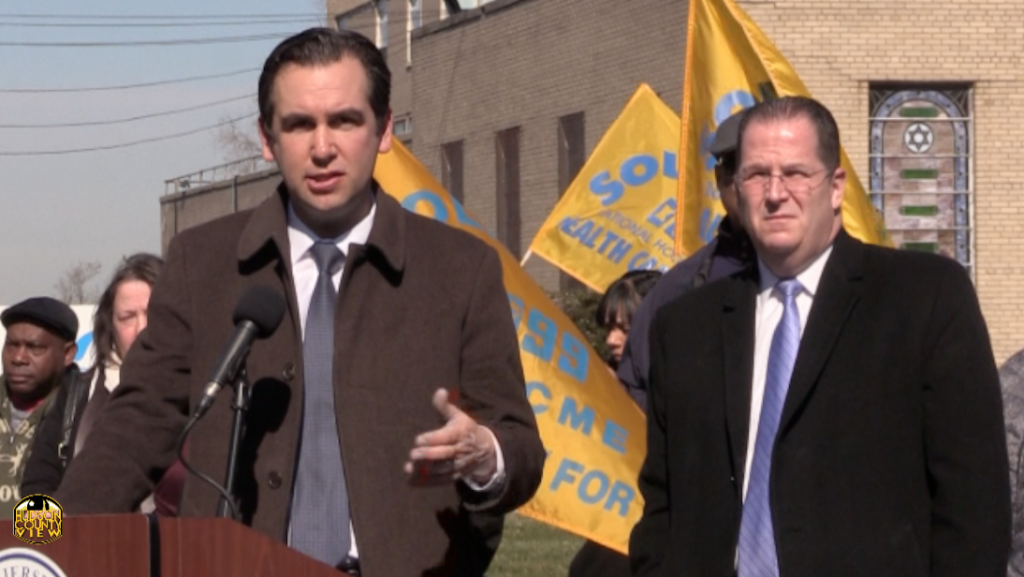 “Senator Stack and I informed the Mayor of Hoboken that we likely to be filing a lawsuit here and if this takes 5-10 years to litigate we are in for the long haul. This project will go well above the Palisade Cliff line,” Fulop wrote in Facebook post this morning that has since been deleted.

“There was no impact analysis, there are procedural issues, and overall – it is really unconscionable to sneak in a massive zoning change during a pandemic let alone one that will impact Union City, Hoboken, and Jersey City for decades.”

On Wednesday, April 15th, the Hoboken City Council approved the Western Edge Redevelopment Plan, a multi-faceted project that would include a hotel, residential tower, and rooftop restaurant/lounge.

The maximum height of the project would likely be in the neighborhood of 15 to 20 stories, though some officials and residents said at the meeting that it could be as tall as 23 stories.

The address of the project, 1300 Jefferson St., could potentially impact the views from the Jersey City Heights and a section of Union City – particularly the Yardley, a 140,000 square-foot industrial building located at 600 Palisade Ave.

A motion to table failed 5-4 and the vote on the agenda item passed 7-2. 2nd Ward Councilwoman Tiffanie Fisher and Councilman-at-Large Jim Doyle vote no.

“From now on, I want to adopt the philosophy, along with seven other council members, where we have developers help fund givebacks for Hoboken residents. We bonded for over $100 million for a park, all of Washington Street … the bills have to get paid eventually,” said 4th Ward Councilman Ruben Ramos, the primary sponsor of the measure.

“As opposed to taxpayers, now we can have developers paying for amenities. Hopefully within these parameters, the mayor can negotiate a solid redevelopment plan for everyone. We’re going to do what’s best for Hoboken residents.”

Ramos also said that he would like to see a new recreation or community center as part of the giveback package, later questioning why Fulop would be weighing in on responsible development.

Nevertheless, Fisher double down on her no vote today, reiterating that she felt the timing was poor.

“I wholly agree that we should look to developers to find community amenities instead of taxpayers. But I believe we should do it in public, not behind their backs.”

Both Stack and Fulop had previously expressed having issues with the size and density of the project, including the evening of the council meeting, as only HCV reported.

However, Fulop is now on the page of collaboration instead of confrontation.

“The mayor of Hoboken and I spoke and we will look to resolve this together,” he told HCV this afternoon after his aforementioned Facebook post was deleted.

In a statement, Stack, also the Union City mayor whose legislative district includes Hoboken, said he had expressed concerns to Bhalla about the project, though was confident they could work together on this issue, with litigation only a last resort.

“I have been in regular discussions with Hoboken Mayor Bhalla about this issue and have expressed my concerns regarding this project to him directly,” Stack explained.

“Mayor Bhalla and I have always worked together, most recently on strengthening tenant protections in the middle of this pandemic, and we have agreed to continue working together to resolve this issue in a manner that that is mutually satisfactory to both of our city’s residents. A lawsuit is a means of last resort and our approach is to work cooperatively to resolve this matter.”