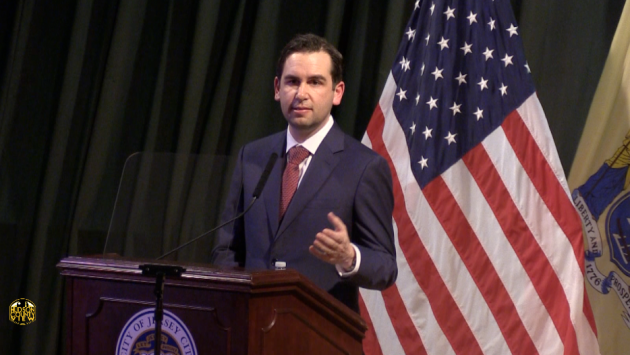 He hailed the bipartisan infrastructure bill that President Biden signed last year, which will invest billions of dollars in replacing crumbling bridges and expanding Amtrak and other public transit options, she said that this was only the first step in addressing the climate crisis.

“Since the start of my tenure, we’ve been investing in local solutions to mitigate the impacts of climate change, but in the end, only the federal government can marshal the resources necessary to confront this existential threat. Families in Jersey City and across New Jersey can no longer wait. We need Congress to take action on climate now.”

Cognetti called on Congress to take up a second package that would invest more than half a trillion dollars in building a 21st century clean energy economy, creating millions of jobs while reducing harmful climate pollution and tackling other environmental hazards.

“Scranton was at the forefront of innovation when we earned the moniker ‘Electric City’ for being the first to introduce the electric streetcar,” she said.

“Now, we need help from the federal government to put Scranton once again at the vanguard of building a new economy powered by clean energy that creates and sustains middle class jobs through innovation.”

The four Democratic elected leaders were in agreement that the president’s proposal would curb climate pollution by expanding green, renewable energy, like solar and wind power, modernize and improve the resiliency of the electric grid and give states and municipalities resources to invest in electric buses, trash trucks, and other vehicles.

“The priorities for the City of Buffalo, related to innovation, infrastructure and clean energy are based on a strategy to fight climate change in an equitable manner, while promoting regional cooperation and serving as a catalyst for international cooperation as a border City,” noted Brown.

“With support from the federal government, we can make transformative investments in our communities that have a generational impact, with an emphasis on environmental justice and collaboration.”

The panel was similar to a four-person virtual panel Hoboken Mayor Ravi Bhalla attended in August, which also featured Cognetti.