A frustrated Jersey City Council approved a $724.8 million budget in a 7-2 vote earlier this evening, with only Councilmen James Solomon and Frank “Educational” Gilmore voting no, citing the delays in getting to a vote, the tax increase, and program cuts. 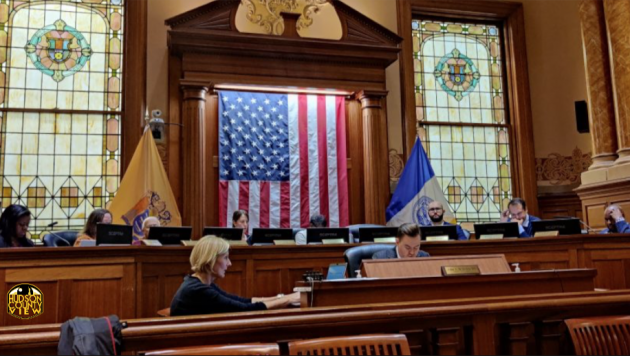 Deputy City Clerk John Hallanan said the $724,818,603.02 budget was published in the Jersey Journal, along with notice of the meeting, on October 14th.

As of 8 p.m. this evening, it still was not available on the city website, though Hallanan provided a physical copy to members of the press prior to the hearing. The preliminary roughly $695 million budget came with a $1,030 tax hike per home assessed at $470,000.

The increase for the new budget was unclear, though the tax portion had increased by $10 million.

“We’re being asked to essentially make a Sophie’s choice here: What happens if we don’t vote for this budget? What are the potential consequences?,” Ward D Councilman Yousef Saleh asked.

“It’s not ideal to be here. If this does not get adopted today, we would not be able to finish our fourth quarter billings and continue operations. I’m asking you to please consider what you have to do to get ahead of next year’s budget process, which will be much different,” replied Finance Director Carmen Gandulla.

“So essentially, city services would grind to a halt?,” Saleh asked.

“Right,” Gandulla responded. Ward C Councilman Rich Boggiano interjected that the city would also lose out on $46 million from the state.

Saleh reiterated that there was no good option at this point, since their only options were to sign off on a tax increase or support furloughs and/or layoffs for municipal employees.

“We need to rein in the Leviathan, the overspending. We need this budget process to start earlier. We need to set up the finance committee. We need to start checking to make sure every department is within their spending limits,” Saleh exclaimed.

“We really need to rein this in. If not, I’m going to have to vote no next year. We can’t continue to squeeze blood from this stone.”

Saleh noted that many on the municipal level criticize the board of education’s tax increases, but questioned what police overtime was actually being spent on, claiming he had to “peg and plead for six units.”

He also questioned if the 911 center would be privatized, which he is against, before voting yes.

Boggiano asserted that there are $600 million ratables the city hasn’t collected, calling on the tax assessor’s office to get out there to collect the money.

“The $26 million we’re going to lose from the state, that’s the only reason I’m voting for it. Things have to change here. I’m tired of paying taxes … We’re in a crisis here in the cit and next year this better get straightened out. I’m gonna be around around for three more years and I’m not keeping my mouth shut no more,” Boggiano declared.

Solomon pointed out that he had been seeking regular updates from the administration and will continue to do so. While he felt they worked hard on the budget, essentially everyone came up short on this one.

“ … The only word I have for this is unacceptable. We are months overdue and I honestly feel like I have to be a detective to figure out what’s going on. Our job is to engage in oversight here and not shy away from that. There has to be a significant change to this process in the coming years,” he stated.

He added the budget utilized $70 million in American Rescue Plan funds which will not be available next year, along with cutting staffing in affordable housing, engineering, city planning, architecture, and construction – as well as a 75 percent cut to the community crisis response program touted by the administration.

Furthermore, he criticized merit and overtime, including the police overtime going over by $3 million.

He criticized the police department for granting officers a great deal of overtime and spending more than $3 million over their budget.

“It’s a collective failure. We didn’t do enough oversight. The administration produced a poor budget. I can’t vote for this in good conscience,” he concluded before voting no.

Gilmore concurred that everyone needs to do better and also described the situation as “unacceptable” before voting against the spending plan.

Council President Joyce Watterman said that while the process certainly left something to be desired, it made little sense to vote it down with only two months left in the year.

“This budget appeared to us very late. We kept asking for the budget. I don’t know what happened … This budget is not like a happy budget that we are going to vote on. We asked for a finance committee. I think the process in the budget needs to be changed,” she noted.

“Whoever’s fault it is, I think there needs to be some discipline there because we kept asking for this budget … Our hands are tied, to be perfectly honest. Next year we have to start all over again. I prefer if the budget is sent to the council first.”