The Liberty State Park Protection Act did not see a full vote today, the last legislative gathering in the current lame duck session, after Assembly Speaker Craig Coughlin (D-19) did not post the bill. 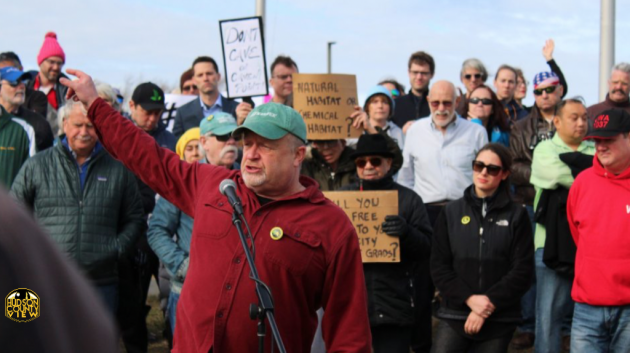 While the bill passed in the senate with a comfortable majority (21-13-6), it did not appear on the assembly table, meaning that it is back to square one for both legislative houses – who will have to post the bill again in the next legislative session in order to complete the hearing.

As HCV previously reported, the bill would prohibit Liberty National Golf Club, co-owned by Paul Fireman, from purchasing the 22-acre parcel owned by the New Jersey Department of Environmental Protection on Caven Point Peninsula for the purpose of expanding the course with another three holes.

Fireman received much more political traction on the bid than a similar one he made in 2018, which the DEP promptly denied.

His bids to purchase property in Liberty State Park are the most recent in a long line of attempts at land privatization from a host of prospective developers eyeing parcels there, all of whom were opposed by the organization Friends of Liberty State Park, and rejected by the NJDEP which owns the site.

Most recently, a marina was rejected by the DEP on the south side of the park in 2018, and a commercial development was rejected in 2016.

It became apparent that the LSP Protection Act, sponsored jointly by Assemblyman Raj Mukherji (D-33) and state Senator Sandra Cunningham (D-31) among others, would not see a full vote today over the weekend, as Coughlin had not posted the bill.

Park preservationists who’ve come out against Fireman’s plans to build on Caven Point are concerned that if legislators don’t expressly prohibit the purchase of Caven Point, it sets a dangerous precedent regarding the sale of public park space.

“All the law says is to let us enjoy the park as a park should be,” NY/NJ Baykeeper CEO Greg Remaud said at Saturday’s rally.

“This is really critical, and it’s going to be our safeguard, because we’re going to win one way or another, we always do. The Caven Point property was purchased with Green Acres money, state conservation open space funds, and federal land and water conservation funds. They have regulations against diverting public property that was purchased for the public, and converting it to a private use.”

New Jersey Sierra Club Executive Director Jeff Tittel said that the Assembly should’ve had it on the table tonight to resolve decades’ worth of fighting over a long line of prospective developers.

There has been one battle after another, from golf courses to shopping malls, water parks to a private marina, and many more. We support this legislation because it will help protect Liberty State Park from inappropriate privatization,” Tittel said. “This will help protect the park from abuse and projects that would hurt, rather than compliment it.”

Additionally, several environmental organizations outspoken against the tentative purchase are concerned about the ecological importance of the site.

Another wrinkle in the discussion is the fact that Cunningham, a primary sponsor of the bill, said on record that she is open to the idea of reaching a compromise between preservationists and the golf course through amending the bill and affording the opportunity for Liberty National Golf Course to purchase a negotiable amount of Caven Point.

Despite this, she voted in favor of the original version of the LSP Protection Act today.

According to New Jersey Election Law Enforcement Commission records, Fireman contributed a total of $5,200 to Cunningham’s reelection campaigns- $2,600 in 2012 and another $2,600 in 2015.

Cunningham couldn’t be immediately reached for comment today after the vote.

Mukherji, on the other hand, maintains that all of Caven Point should remain prohibited from sale, and judging by written remarks to those at Saturday’s rally, he will continue efforts to get the bill on the Assembly floor as soon as possible.

“Liberty State Park is free, open, urban green oasis and it’s time to guarantee by law that she stays that way,” Mukherji said in a letter read by his constituent affairs aide Jay Geldziler at Saturday’s rally.

“Urban families don’t have a lot of open space to enjoy. whether it’s this week, or in a couple of months, we won’t stop fighting until this bill becomes law.”

Mukherji did not respond to requests for comment on today’s session.

Days ahead of the vote, the NAACP New Jersey conference took its stand on Fireman’s hill.

In a letter to Senator Ronald Rice (LD28), eight leading New Jersey NAACP members called for an amendment to the Liberty State Park Protection Act that will allow Liberty National Golf Course to purchase the parcel it desires, citing the charitable efforts that Fireman promised to incorporate if he is granted a golf course expansion.

“It means the creation of a First Tee program at Liberty National Golf Course, which will greatly benefit minority communities in Hudson County,” the letter reads.

“The First Tee of Essex County and the First Tee of Plainfield, just two examples of the program in New Jersey, both have over 75 percent minority participation. Moreover, in addition to learning about the game of golf, The First Tee has provided tutoring and over $400,000 in college scholarships to underprivileged young people who might otherwise have not had these kinds of opportunities.”

“Paul wants to create three new golf holes [at Caven Point] as part of Liberty National Golf Club. That would keep the land as green space while also ensuring the PGA Tour continues to hold premiere tournaments at Liberty National. These tournaments mean tens of millions of dollars to Jersey City, Hudson County, and New Jersey,” Local 825 business manager Gary Lavalee said in a letter to members of the senate.

Other labor unions, however, such as the Communication Workers of America, stand against the golf course expansion, arguing that maintaining the site as public land is paramount to what Fireman has offered.

In a lengthy statement, Friends of Liberty State Park President Sam Pesin was heavily critical of Fireman, but still vowed to continue the push to get the legislation passed.

“If it wasn’t for the influence of the billionaire Paul Fireman, owner of Liberty National Golf Course, and his misinformation lobbying campaign, Governor Phil Murphy would have already signed the landmark and necessary Liberty State Park Protection Act,” Pesin began.

” … The billionaire’s goal is to privatize and destroy the Caven Point natural area habitat to relocate three golf holes for multimillionaires closer to the bay. The Friends of LSP look forward to the reintroduction of the Protection Act in the next session and becoming an iconic law to protect this treasured park for future generations.