An ethics complaint from Perry Belfiore, a staunch critic of Hoboken Mayor Ravi Bhalla, over an architect contracted by the city renovating his home will be reviewed, according to the head of the New Jersey Department of Community Affairs’ ethics unit. 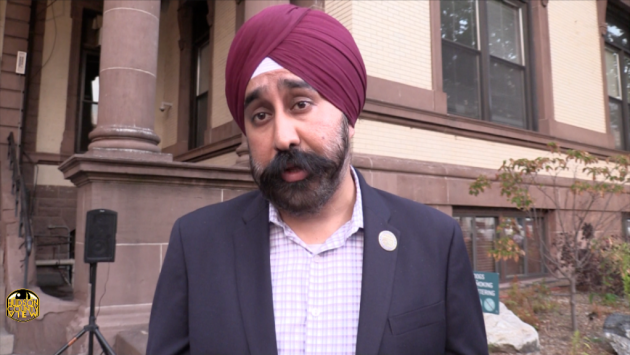 “The Local Finance Board (Board) acknowledges receipt of the complaint letter you filed alleging a violation of the Local Government Ethics Law,” Dana Jones, who also sits on the LFB, wrote in a letter to Belfiore yesterday.

“Please be advised that it is the Board’s practice and intent to conduct a thorough investigation of all complaints. The Board’s staff is processing your complaint at this time and will, subsequently, present it to the Board for review and authorization of any necessary formal investigation.”

John Nastasi, of Nastasi Builders, received a $1.7 million contract via a council vote in February to design the early phases of their municipal complex at 1501 Adams St., which at the time was going to be a public safety complex with a Department of Public Works garage.

According to building permits, the total cost of the renovation – which began in the summer – will be $547,700, as The Jersey Journal first reported in October and what Belfiore based his complaint on.

This isn’t the first time Belfiore has went to the state to file a grievance about Bhalla, with the two ensnared in a years-long legal battle over Bhalla, then a councilman-at-large, voting for a city contract for a lawyer he shared a lease agreement with for an office space.

While he received a notice of violation in November 2017, the two parties finally settled the matter in August 2018, with the state’s position remaining that Bhalla violated New Jersey ethics law and the mayor not admitting to any wrongdoing.

Rob Horowitz, a spokesman for the mayor, noted that a judge overseeing the prior matter referred to Belfiore as “a bigoted malicious crackpot with a personal grudge against Bhalla” and while the complaint has no validity, the board must still investigate it.

“It is important to consider the source of this complaint. It was filed by Perry Belfiore, a long-time political antagonist of the mayor and a professional gadfly. In a hearing on a previously filed complaint, Judge [James] Geraghty called Mr. Belfiore ‘a bigoted malicious crackpot with a personal grudge against Bhalla,'” he said in an email.

“As with all complaints no matter how baseless, however, the ethics board is obligated to investigate it. This complaint is without merit. The Mayor vetted the hiring of Mr. Nastasi for his home renovations before doing so with the City’s legal counsel and with outside counsel, both of whom determined it was not a conflict.”

While Bhalla told HCV in May that “there’s no way it’s not gonna happen” in regards to the municipal complex, which had expanded in scope to include a community pool, municipal court, council chambers, among many other amenities, the city looks to be heading in another direction after being unable to get six votes for a necessary bond effort.

The city council approved an $84 million bond to acquire the land between Madison, Jefferson, 15th, and 16th Streets for a new DPW garage at the end of last year, which is needed to fulfill the terms of their Monarch settlement with Ironstate by November 2024.

At that point, the city must be vacated from their current DPW facility, located at 256 Observer Highway.

As for Belfiore, he often remains involved behind the scenes on Mile Square City politics, signing his name onto a three-person recall committee for 5th Ward Councilman Phil Cohen, a political ally of Bhalla, in May.

However, that effort never really got off the ground, with signatures never being submitted to the city clerk’s office within the 160-day time frame.

Belfiore said that the effort took a backseat to the November board of education race, where he supported the “Kids First” team, who lost to the Bhalla-backed “Leadership that Listens” slate.

Prieto: Fulop vs. Sweeney is ‘an illusion’ created around North Jersey...