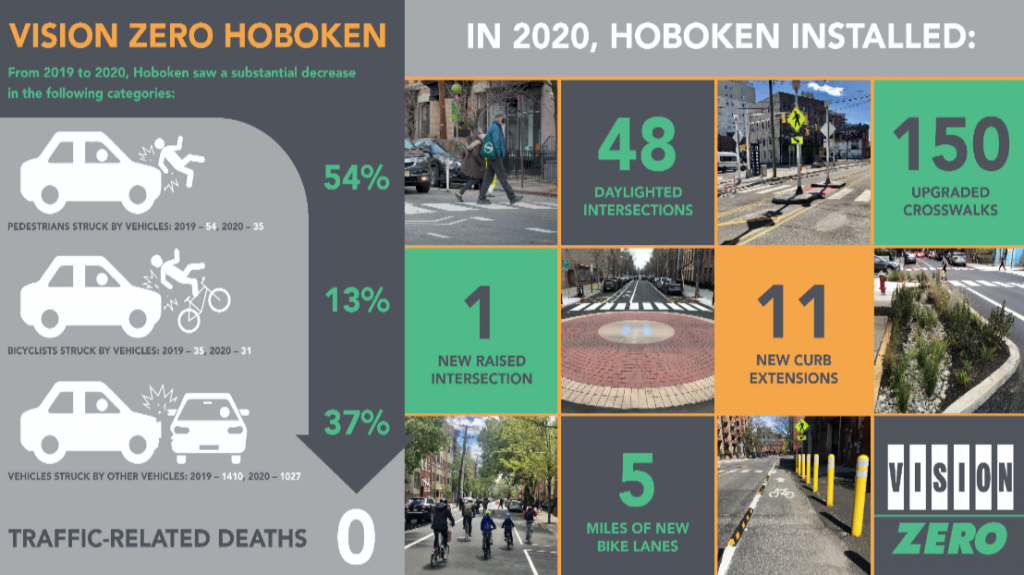 Additionally, for the third consecutive year, Hoboken had zero traffic-related fatalities in 2020, the most important benchmark highlighted in their Vision Zero campaign. Hoboken’s Vision Zero improvements come at a time when traffic fatality rates rose nationwide.

“It’s clear that our Vision Zero pedestrian safety campaign is creating even safer streets for all of our residents and vulnerable users, despite nationwide trends going in the opposite direction,” Bhalla said in statement.

“Our focus on improved street designs that include a variety of pedestrian safety measures including new high-visibility crosswalks, curb extensions, bike lanes and more are a major reason why we’ve had another year of 0 traffic-related deaths in Hoboken. We will continue to prioritize safe streets in the years ahead to achieve our goal: 0 traffic-related deaths and injuries by 2030.”

Hoboken’s Vision Zero improvements in 2020 coincide with higher traffic fatalities in New Jersey, which increased from 524 in 2019 to 552 in 2020, according to the New Jersey State Police.

In August of 2019, Bhalla signed an executive order officially launching the Vision Zero safety initiative, immediately establishing a Vision Zero Task Force and creating a Vision Zero Action Plan – the city’s roadmap for achieving the elimination of traffic-related deaths and injuries by 2030.

The Action Plan is currently being finalized by the task force and will be presented to the city council and the public in the coming weeks.

2nd Ward Councilwoman Tiffanie Fisher said on Thursday morning that she was happy to hear about the latest statistics, but acknowledging the impact of the pandemic is also important.

“I love that all of our crash statistics have declined. But does Mayor Bhalla really believe that it has nothing to do with COVID, where there are less cars and people on the roads?”

Editor’s note: On Thursday morning, the City of Hoboken offered statistical corrections. At that time, this story was also updated with a comment from 2nd Ward Councilwoman Tiffanie Fisher.