The Jersey City Council caucus saw a presentation laying out the details of the Bayfront Redevelopment Plan for the west side of the city’s waterfront. 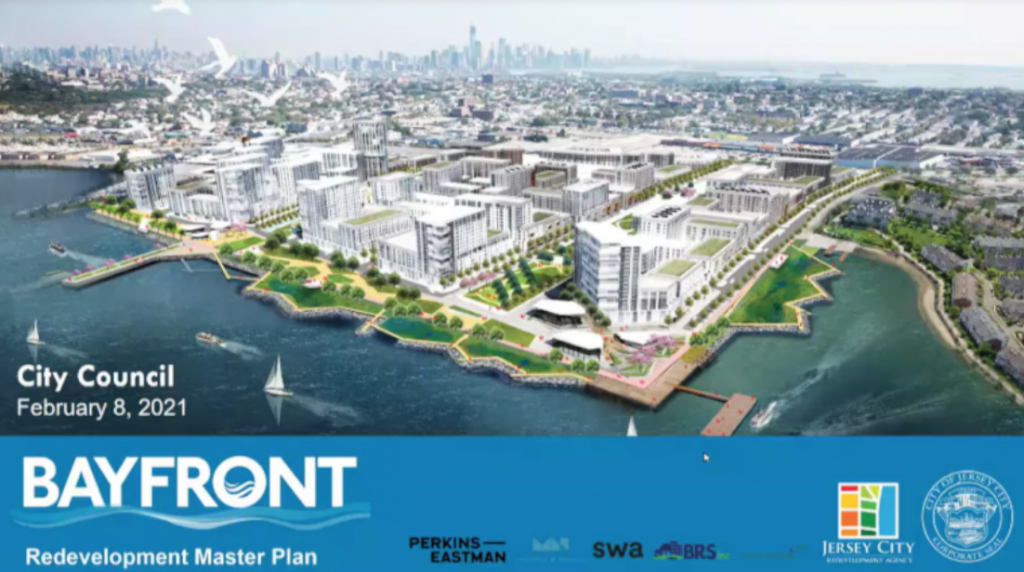 The Bayfront Redevelopment Plan heads to the council for a vote on first reading tomorrow after clearing the planning board last month, as only HCV reported.

Jersey City Senior Planner Matt Ward began by thanking Ward A Councilwoman Denise Ridley and Ward B Councilwoman Mira Prinz-Arey for sitting on the Bayfront advisory committee and helping develop the parameters of the project.

Eric Fang of Perkins Eastman, the project lead for the city’s Master Plan, then led the presentation. He noted the site is on the corner of Route 440, the future site of the Hudson-Bergen Light Rail (HBLR) extension, and the Hackensack River.

It’s a “confluence of all different modes, north, south, east, and west,” he said.

Jersey City is working with the New Jersey Department of Transportation (NJ DOT) to develop a new configuration for the access points across Route 440 to make it more pedestrian-friendly.

Fang said that the fantastic innovations and upgrades to the Gold Coast waterfront could be similar to what happens on Jersey City’s Bayfront.

“There’s equal potential here on this side. This offers the opportunity to provide waterfront access,” he added, later calling the project “a new downtown for the west side.”

Included with 35 percent affordable housing would be a maximum requirement of 15 percent of the housing units to be priced for workforce housing.

“This is a full-fledged neighborhood,” Fang added.

He also noted that planners on working with NJ Transit to design the station square area, which will be pedestrian and bicycle friendly, and will also include an area designed to attract crowds.

“The Point” will be a destination for restaurants, concerts, and other public gatherings.

There will also be green energy ideas such as a microgrid to mitigate the advent of widespread outages.

Additionally, the amended plan makes the buildings envisioned in the Bayfront more compatible with nearby Society Hill by making them smaller, as well as aiming to shrink municipal utility authority’s (MUA) presence in the area.

“All this infrastructure will be accommodated, but it will be really hidden from view from the public,” Fang explained.

The new plan also adds more green space with buildings set back from the road.
This plan has requirements for a silver standard cert in LEED or USGBC. Furthermore, Electrical Vehicle (EV) charging stations will be included.

Jersey City currently owns the land. Honeywell, the site’s previous owner until 2008, has worked to restore the shoreline and the environment.

Fang noted they need to do a feasibility study and the NJ Department of Environmental Protection’s (NJDEP) approval to go forward with the project, with Ward stating that no financial analysis has been completed to date.

Also on the agenda was a resolution calling for an audit of the city’s payroll tax collections and report the findings of the 2020 payment in lieu of taxes (PILOT) study. The measure was introduced by Councilman-at-Large Rolando Lavarro.

“We’re justified in calling for an audit. Jersey City public schools rely on a payroll tax. I ask for all your support in calling for this resolution,” Lavarro said.

He was especially concerned that the Katerra did not pay payroll taxes in 2019 and 2020 until they were in danger of seeing a deal with the city collapse.

Katerra is related to Fields Grade Development Company, the company developing the 621-unit Water Street Redevelopment Plan, which was pulled from the January 20th council agenda.

Lavarro also pointed out that the Jersey City Public Schools are facing a $300 million deficit for the 2021-2022 school year and they need all the help they can get from the city.

He added an ordinance is needed to notify building constructors on the payroll tax.