Bayonne Council President and mayoral challenger Sharon Ashe-Nadrowski discussed her plans related to responsible development in the city at a meet and greet in the 3rd Ward last night. 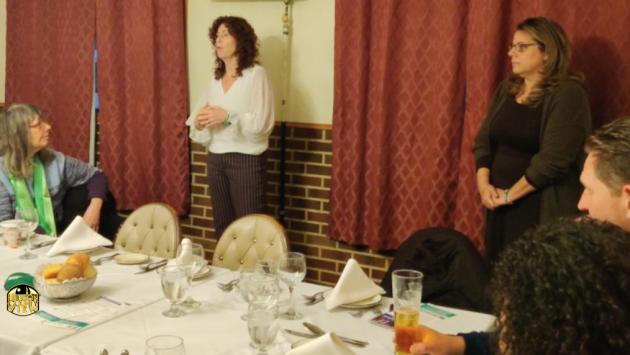 Ashe-Nadrowski explained her plan to increase public participation in development projects, proposing that when an area needs to be redeveloped, the council has to pass an ordinance authorizing a study.

“When an in-house study comes up, there is no notice to the neighborhood,” Ashe-Nadrowski said at the Mediterreano Restaurant last night.

At the point, sent to the city planning board which authorizes the study and if approved, the council then must okay the proposal.

She also noted that plans that do not need zoning variances don’t need planning or zoning approval, pointing out that developers have knocked down one- and two-family homes without the community being notified.

“Before that area in need of study even comes up, before we even consider it. There should be community meetings,” Ashe-Nadrowski said.

“We can do it in public buildings. When we are going to change the integrity of a neighborhood … people should have a say.”

To that end, she made a campaign pledge to have such meetings held.

“We can make our resolution to say, hey we’re requiring 1,000 feet because, we want everyone to know,” Ashe-Nadrowski added.

She argued those a couple of blocks away are still impacted by a development project.

“We really need the community to give input, because otherwise our hands are tied,” said  Board of Education President Maria Valado, who is running in the 3rd Ward with Ashe-Nadrowski.

A member of the audience asked about the Marist High School project, which was approved at last month’s council meeting despite the possibility of a state investigation.

Ashe-Nadrowski said the plan was completed in a month “which literally never happens. That property has received a redevelopment plan that allows anything to happen. It is the most broadest redevelopment plan ever written in Bayonne. They are by right allowed to build a 16-story residential.”

“They can build anything they want there. They can pretty much do whatever they want,” she stated, also claiming that the city planner said this was like writing two redevelopments for one property.

There was a push to approve the Marist plan as is, with officials told after the fact that it seemed money for the project had been budgeted prior to council approval.

“They all voted yes to something they said was dishonest,” she added, reminding those on hand she was the only council member who voted against it.

The Caschem development project was also discussed after a question from the audience.

Ashe-Nadrowski explained that ultimately the Caschem property had six stories okayed on the east side, and then a 16-story warehouse on the west side.

“This is the problem with transparency, you have to let everyone know the whole picture. They’re trying to keep people focused on the six-story aspects. It’s a flawed process. But we can change that,” asserted Ashe-Nadrowski.

“Our city is broken. We have overcrowding, too many large buildings, not enough classroom space. The streets are filthy. We have potholes and we have no transparency,” he exclaimed.

“The city government is now run by a few, not the people. You own City hall, they don’t own City Hall. Our children aren’t getting the funding that they need and that they deserve,” he added, also calling for a recreation center to be built.