Beginning in the spring, members of the West New York Education Association (WNYEA) hijacked several board of education meetings before finally receiving a new contract about two weeks before the November 8 election. 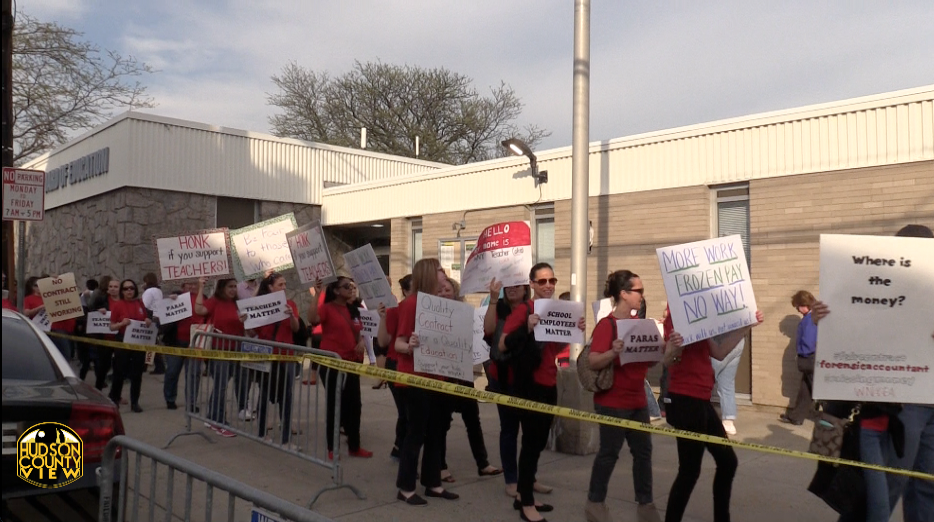 After months of terribly sleepy, uneventful meetings of the West New York BOE, dozens of local teachers stormed the March meeting to demand a new contract – something they had been without since July 1, 2015.

“No money, but new titles are created and salaries for certain individuals are increased and new carpeting is laid: no money,” WNYEA President Anita Kober said to the board at the time.

“At this time three years ago, you were asked to prepare a budget up to the cap and you did not, two years ago we stood here and said the same thing and again you did not.”

The subsequent meeting was more of the same, with the teachers receiving an assist from Trustee Matthew Cheng, before the WNYEA erupted with a massive 400-person protest two weeks later.

“What do we want? Contracts! When do we want them? Now!,” hundreds of teachers chanted outside of 6028 Broadway prior to a scheduled negotiation meeting.

Again, the BOE was chided for making short-sighted and irresponsible budgetary decisions for years, but a solution still appeared to be a long ways off.

In what was supposed to be a good fair measure, the nine-person board approved a $136 million budget with an 8 percent tax increase – representing an additional $850,000 to go towards the teachers’ contract.

However, this did not result in anything getting settled, so teachers remained restless and unimpressed.

After enjoying a peaceful summer season, the teachers picked up where they left off, with tensions rising among trustees to the point where Cheng and Lorena Portillo walked out of the meeting.

After scrambling to get Board Vice President Damarys Gonzalez to the meeting, the trustees were subjected to about an hour of teachers airing their grievances, prompting some damage control from Superintendent of Schools Clara Brito Herrera and President Adam Parkinson.

Finally, after about eight months of unrest, the BOE approved a memorandum of understanding for a $62 million, four-year teachers’ contract.

Detractors called it a campaign ploy for the Mayor Felix Roque-backed Children First team (Parkinson and David Morel ran on the ticket), the WNYEA was thrilled to finally get this monkey off their back.

As for members of the public, we were treated to some incredibly entertaining letters to the editor, one from Trustee Jonathan Castaneda, one from Portillo and one from a local resident, once the smoke settled.