A relative newcomer to West New York, Campos-Alvis started by introducing himself to residents who may not know him.

Given his educational background, which includes masters degrees from Carnegie Mellon University and The Massachusetts Institute of Technology (MIT), Campos-Alvis answered whether it was realistic to think he could replicate his educational achievement with West New York kids, and whether more vocational programs were needed at the high school level.

He followed up by blasting wasteful spending that could go to after-school programs and the idea of a Charter School in West New York, as well as those running for the WNY BOE on the Chart School platform.

With so much controversy surrounding Superintendent of Schools John Fauta, Campos-Alvis said a new administrator was needed to lead the district forward, but that no one could succeed until politics were removed from the delivery of education.

Finally, Campos-Alvis talked about the politics of the race, stressing his independence. 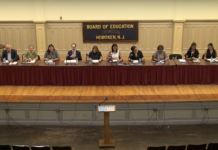