With Hoboken 2nd Ward Councilwoman Tiffanie Fisher’s lawsuit still lingering, the city council voted to increase union donation limits from $500 to $7,200, as they did in December, at last night’s meeting. 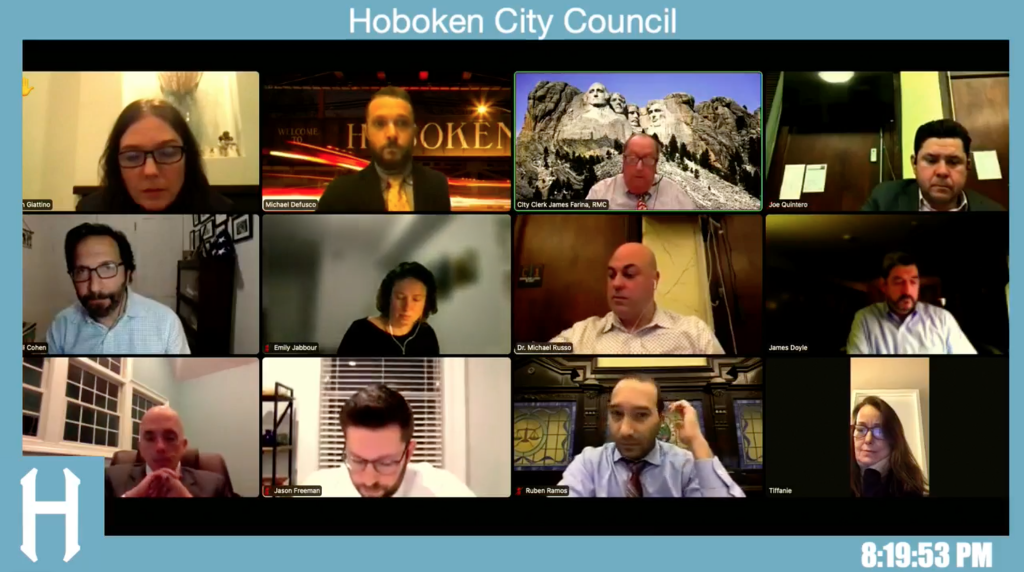 The measure was being reconsidered after Fisher filed a lawsuit to nullify it earlier this month, contending that the city violated state statute by making substantive changes to the ordinance between 1st and 2nd reading.

“The thing that I’m opposed to is exempting unions to the campaign contribution limits. I think if you run for office it should be an even playing field. People that are incumbents are associated with a ruling political faction [and] shouldn’t have a leg up on their opponents by being able to get larger donations from unions,” said 5th Ward resident Kevin Davis.

“It is like the equivalent of Seton Hall playing the New Jersey Institute of Technology in basketball: Seton Hall’s always gonna win because they have more money to recruit, it’s not just because they play in the Big East.”

Ann Graham, a former leader of the People for Open Government campaign, was one of several who fought to take money out of local politics about a decade ago, leading to Hoboken’s stringent campaign finance rules being enacted.

“There are over 10,000 people in this town [who] voted to take money out of politics, to level the playing field, and here you are trying to bring it back in and I just find this just a slap in the face to so many people who worked so hard and some of you were even involved in this campaign and you’re totally ignoring the will of the people,” she exclaimed.

“I mean, for many years you’ve talked about Hoboken being reform, progressive, we’ve changed, we’ve kicked all the corrupt people out of local politics, but now we’re just bringing it all back in. And the mantle of progressivism and reform politics is no longer applicable.”

Just before the vote, Fisher reminded her colleagues that Corporation Counsel Brian Aloia recommended the counsel vote on the measure again to avoid legal challenges prior to her court filing, therefore she did not see on conflict or issue wit participating.

She echoed what Graham said, noting that a lot of people had worked to get strict campaign finance laws in place and the community at large did not want to see that change.

“Why do we need to go backwards? So far, the only argument that I’ve heard is that ‘well, if one person breaks the law, we should let everyone break the law’ instead of actually working together to do everything we possibly can to make these laws even stronger,” said Fisher.

6th Ward Councilwoman Jen Giattino said they should be setting an example as elected officials, and that if someone decides to take donations over the $500 limit, they should trust the public to hold them accountable if the city and/or courts cannot.

“Every resident we heard from, we haven’t heard from one resident, that’s said ‘you know what, this is a great idea. Let’s allow elected officials in Hoboken to take larger donations from unions.’ Not one. We haven’t had one person email us, call us, or call into a meeting to say that.”

5th Ward Councilman Phil Cohen, who co-sponsored the ordinance with Councilwoman-at-Large Emily Jabbour, reminded his colleagues that the “trigger mechanism” added between first and second reading ensures that the local legislation wouldn’t take effect unless the case between City Clerk Jimmy Farina and 1st Ward Councilman Mike DeFusco ends without the latter facing any sanctions.

The complaint, filed in October 2019, says that DeFusco took union donations well above the $500 limit and will theoretically test if the ordinance is enforceable or not, though the local municipal courts don’t appear to be in a hurry to hear the case after 28 months.

He also pointed out that when Fisher filed a complaint against DeFusco in 2017, she said he “negatively prejudiced” the other mayoral campaigns at the time by accepting donations above the limit.

“That was the point here: the idea was that if one candidate flouts the rules and ignores the limits, and collects donations that are in excess, it prejudices all the other candidates involve … When Kevin Davis says we should have a level playing field, we do want a level playing field, their should be one set of rules with respect to fundraising,” Cohen said.

The first reading passed on February 2nd as an emergency add-on item, the same day when Fisher’s lawsuit was made public. The litigation is still pending as of this writing.

“Disappointed, but not surprised, that my council colleagues voted for the 4th time to put their special personal interests first and ahead of the public’s interest,” Fisher said today.

“This is now Mayor Bhalla’s chance to veto this ordinance, say ‘No’ to big money in our local elections, and work together to strengthen our campaign finance laws that were put in place by Mayor Zimmer and the residents of Hoboken.”

Op-Ed: Voting for the ‘Leadership that Listens’ Hoboken BOE team is...

Projected $7M budget deficit could equate to 80 layoffs in Hoboken,...