“The future here in West New York is to grow the community and to make sure we protect each and everyone out there that needs help,” West New York Mayor Felix Roque said during the ceremony.

“And we are outgrowing, and we are in a deficit of police officers and now through the leadership of my [Police] Director [Robert] Antolos and the fantastic captains in the police department, we were able to recruit new individuals to make the department even stronger.”

Earlier thanking the families of the officers for supporting them in the work they do, as well as the efforts of the local Policemen’s Benevolent Association (PBA), before stating he still plans on bringing a military school to town.

“We have a brighter future, God willing, we’re looking into opening a military academy in the near future for kids who need help. And we’re doing greater things with our police force,” the mayor added.

At the ceremony, Sergio Sanchez was promoted to captain, Sammy Lara and and Michael Clement earned the distinction of lieutenant and Karriem Shabazz and Michael Acosta received the rank of sergeant.

Acosta, the openly gay son of former deputy mayor and current Board of Education Trustee Silvio Acosta, settled a discrimination suit with the department in May for about $30,000.

The resolution approved by the town’s board of commissioners in May did not state anything about Acosta receiving a promotion as part of settling the litigation. 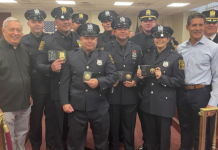