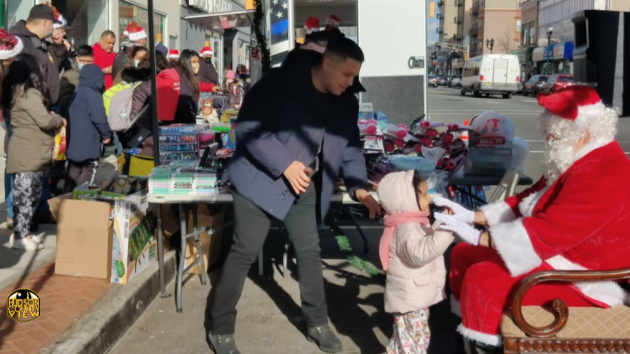 Mostly young children lined up around the block with their parents to receive one toy per child and a picture with Lt. Billy Kelly putting on a different uniform than usual to portray Santa Claus. There was also bilingual outreach for Spanish speaking residents.

“We’re just happy we have the opportunity and thankful to give back to the community we serve,” West New York Policemen’s Benevolent Association Local 361 President Leonel Abreu, a patrolman for the past two decades, said.

PBA members bought toys for the drive and the local previously held fundraisers to buy them, along with hosting a toy drive. Additionally, the state PBA donated a trailer to help with the local’s holiday efforts.

“Hopefully [we’ll] make some kids have a bright day: we have a lot of toys,” Abreu added.

The toys being given out included skateboards, soccer balls, footballs, headsets, dolls, toy soldiers, and unicorns, among a a variety of other gifts.

Furthermore, TVs and video games were being raffled off, with children receiving a ticket by simply writing down their name and phone number. The PBA will contact the winners in the near future.

Abreu also said that last week they gave 1,500 plus toys to kids in the care of the state agency formerly known as DYFYS, with Kelly again dressed as a Santa Claus.

PBA Local 361 also fed the needy on Thanksgiving and raised $10,000 for the American Cancer Society.

Abreu noted they have been holding their Christmas Toy Drive since 2008. Typically the event is indoors, but they did it outside today as a safety precaution due to the recent COVID-19 surge.