A marathon meeting of the Weehawken Township Council last week where the governing body approved a measure changing land use requirements is likely going to lead to at least one showdown in court. 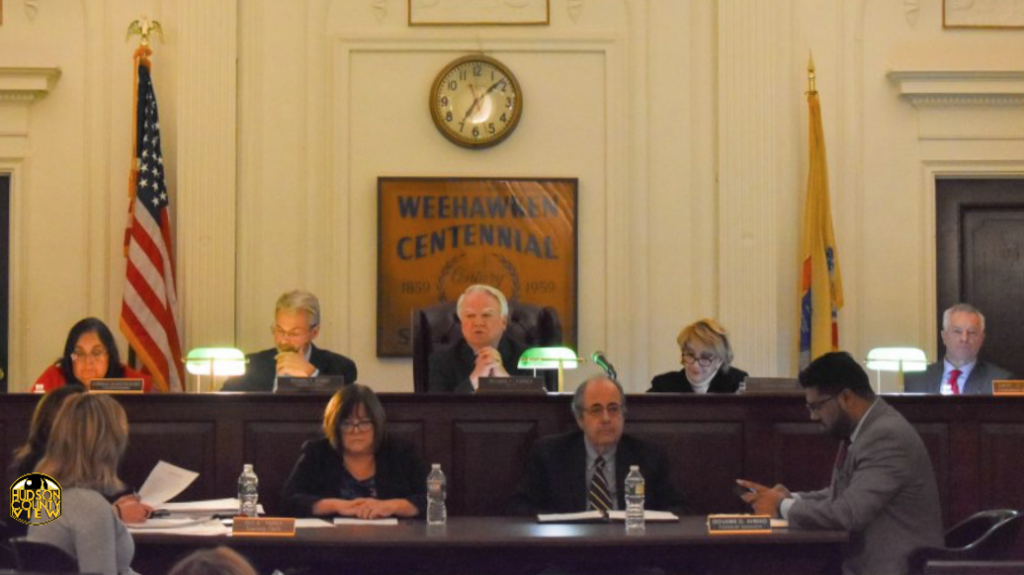 On Wednesday night, Weehawken passed an ordinance that changes land use and building requirements in the town’s three southernmost redevelopment districts.

Arguably most notably, the ordinance, first introduced in November, imposes parking conditions on a new development – requiring any builders to include 270 permanent parking spaces for public use.

The ordinance changes much of the land requirements designated more than three decades ago in 1984.

“That area was meant to be all commercial, but over the years that didn’t work out so we approved housing. This codifies what we’ve already done,” Mayor Richard Turner said.

The legislation, which was approved unanimously (5-0), is largely viewed as a response to a development plan put forth by Hartz Mountain Industries that was rejected by the town’s planning board in November.

The decision came after nine meetings debating a proposal that centered around a pair of 18-story residential towers over the Weehawken Cove, which borders Hoboken.

The project was voted down due to height and parking concerns.

According to Wednesday’s ordinance, the developer would have to submit a revised development plan “that satisfies all of the requirements and limitations” contained in the local legislation.

However, the ordinance drew immediate criticism from a number of parties, all on different grounds.

For starters, Hartz Mountain Industries opposed the measure. Local residents also voiced opposition to the project, warning that historic views in the Weehawken Cove would be obstructed, despite the reduced height requirements.

Additionally, the Fund for A Better Waterfront, a group that advocates for a contiguous public park along the Hudson River, also objected to the ordinance.

Meanwhile other private businesses, specifically the Lincoln Harbor Yacht Club, made objections to the ordinance as well.

“If nobody agrees with it, we may have accomplished the perfect ordinance,” Turner said during the meeting.

“Actually, you know what we should do. We should get the attorneys – they all liked some parts of everything and they didn’t all like parts of anything – maybe we should get them in a room to come up with an ordinance that we can all be happy with.”

At this point, at least two parties say they will definitely take legal action against the town.

The most vociferous opposition to the ordinance, naturally, came from Hartz, who called the parking requirements “illegal,” an “unlawful exaction,” and “a quid pro quo.”

In their previous plan, none of the 398 parking spots in the garage would have been for the public.

The township then put forth last week’s ordinance altering requirements for the redevelopment zone, which would mandate the developer add more than 200 public parking spaces to the area.

Christopher Porrino, a former state attorney general who is representing Hartz, said the ordinance “is directly contrary to statutory and constitutional law.”

“In legal terminology, that is a quid pro quo, it’s an unlawful exaction, and it’s illegal. Demanding the developer provide benefits that have nothing to do with the proposed development is not supported in the law,” he added, citing legal precedents where courts have struck down similar attempts by municipalities to receive certain community benefits.

Porrino all but guaranteed that the company would file legal action: “We’re confident that the court will agree with us.”

Turner pushed back against the notion that the stipulation was a quid pro quo.

Furthermore, Weehawken residents say historic views of Manhattan over the Weehawken Cove will be obstructed – even with the diminished height requirements – if this project is allowed to proceed.

“In passing the ordinance, the Township ignores pleas from residents to consider the environment, open space, traffic, and important historic views of the Lincoln and Hoboken Harbors, which will now be forever blocked and lost when Hartzâ€™s application is easily approved by the Planning Board,” said Nicholas Sekas, an attorney with Sekas Law Group, LLC, representing several residents near the development.

“There is no doubt that once constructed, the Hartz project will obstruct views of the historic and picturesque Hoboken and Weehawken Cove, as well as portions of the Hudson River and the New York skyline,” he added.

Sekas said he will likely file legal action against the town.

The proposed project, and the ordinance, do not do enough to ensure flood protection and may create environmental issues, according to the Fund for a Better Waterfront, which has worked to secure open public space on the Hudson River.

Speaking at the meeting Wednesday night, Ron Hine, the executive director of the fund, urged the town council to reject the ordinance, claiming the legislation is “not being done in a way that I feel is fair to all of the stakeholders involved.”

“Here was an opportunity for you to come up with an ordinance that would resolve the issues that were brought before you, and this ordinance utterly fails to do that,” he added.

Hine claimed that the ordinance, most notably, does little to incorporate the Rebuild by Design project adopted by Hoboken.

He went even further by claiming that the ordinance would “have negative consequences … for the entire township.”

“The enormous increase in the number of dwelling units allowed; the real possibility that much less open space will be provided; failure to protect views of the Hudson River; and traffic and other environmental impacts need to be explored much more fully than is being done through the truncated process that has led to the ordinance now before you,” attorneys for the fund said in a letter to the council.

Hine said they are also now considering taking legal action against the town.