North Hudson Regional Fire and Rescue received awards today from representatives of Employer Support of the Guard and Reserve (ESGR), a Department of Defense program that promotes civilian employers that provide exemplary support and opportunity for military reservists. 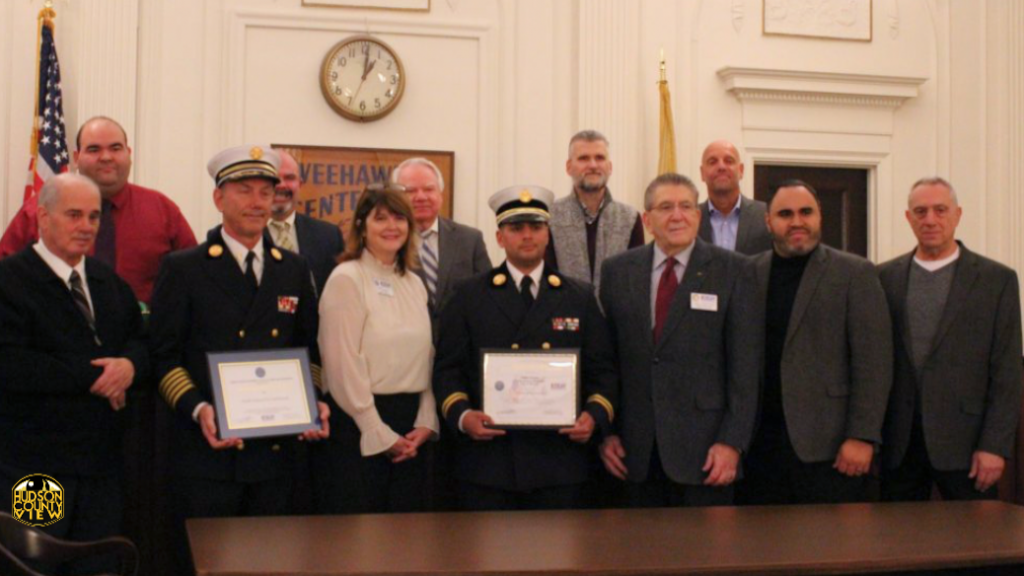 Pratts, a Marine Corps veteran, received recognition for his role as a 16-year member of North Hudson Regional Fire and Rescue, and also for his role as a certified on-the-job trainer for the Department of Veteran’s Affairs.

Mary Tosline, an ESGR representative based in Hudson County, said that today’s award was spurred by several individual nominations centered around the department’s abundant inclusion of veterans and reservists alike.

“We were founded in 1972 after the draft ended, and the government thought that private employers, and reservists, should be able to coordinate,” Tosline said.

“The program also provides support with issues which need to be resolved, and provides outreach to help employers and reservists understand their rights and responsibilities. The thing that we’re doing today, which is the fun part, is recognizing the leaders that really, really exemplify the type of leadership that supports our country and national defense by helping our citizen soldiers.”

“When you think about maintaining a job and a family, and throwing military service in the mix, it can be quite challenging,” Tosline continued. “The Above and Beyond Award presented to North Hudson Regional Fire and Rescue for their continued and ongoing support of military reservists, and veterans, as well.”

Louis DeGeronimo, the state executive director of ESGR, said that first responders are an ideal employer for current reservists and military vets, and that North Hudson Regional Fire and Rescue goes above and beyond to incorporate current and former military personnel into their organization.

“51 Percent of our entire fighting force is made up of reservists. Think about that. 51 percent of them are citizern soldiers, who have jobs to balance between active duty roles and civilian positions,” DeGeronimo said.

“First responders operate in a quasi-military fashion, especially in terms of the organizational aspects and schedules, and you guys do extremely well in acknowledging that these soldiers can be a part of your team while doing what they have to do as reservists, whose schedules could easily be disrupted. Without being able to contribute that way, we are not the United States.”

The department began efforts to seek out recruits with prior or current military experience years ago, Chief Frank Montagne said. Now, 22 active service members and 110 veterans make up the definitive majority of the department’s 210 firefighters.

Montagne added that he’s grateful that the department, which jointly serves the towns of North Bergen, Union City, West New York, Weehawken, and Guttenberg, has been given the resources to accept record-breaking recruitments stocked with vets and reservists in recent years, including a record-breaking class of 44 new recruits back in March.

Back in 2018, NHRFR inducted a then-record class of 37 recruits, all of whom were military veterans.

“Especially for those in the reserves, jobs are hard to come by, and this is a wonderful award,” Montagne stated.

“We’ve done a lot with the military over the years, and I have to give credit to the board for being able to do this. We’re all very fortunate and happy to have vets and service members with us.”

Guttenberg BOE votes to switch to remote learning, could last through...