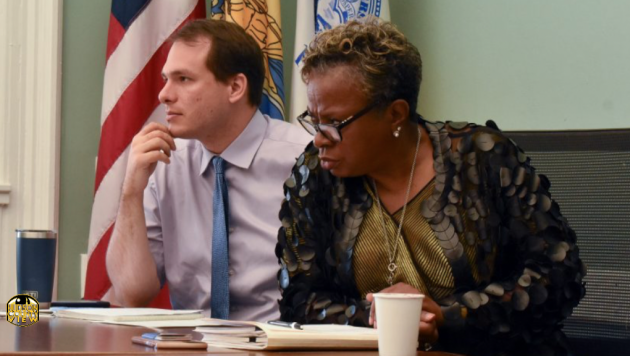 “After bringing Suez executives before the council at our last meeting, I know the next step is a thorough investigation to ensure the safety of Jersey City’s water supply,” Watterman said in a statement.

“The City Council will work together as a whole to investigate SUEZ’s action and ensure a plan for water distribution and emergency communication is implemented for all future events.”

If approved, the committee would be responsible for reviewing Suez’s emergency response to Tropical Storm Ida which brought extreme flooding that resulted in substantial damages to property, facilities, and structures throughout Jersey City.

This was coupled with the fact that residents were issued a boil water advisory on September 2nd before the New Jersey Department of Environmental Protection lifted it on September 5th.

On September 7th, the council grilled Suez officials on short notice at their caucus meeting for about 45 minutes and it was unclear what the next steps would be until today.

“Residents of Jersey City were left without access to clean water for days. Suez failed Jersey City residents when they needed them the most and they must be held accountable,” added Solomon.

“The residents of this city deserve answers, and to know that next time a storm hits, they will have access to clean water and timely information.”

While their was a simultaneous boil advisory in Hoboken, Jersey City residents and officials were incensed over the fact that Suez botched water deliveries on Friday, September 3rd, showing up at least three hours later than initially advertised at most locations.

Furthermore, many residents remained unaware of the boil water advisory due to failures to implement best practices for emergency alerts.

The Jersey City Council is able to designate any number of its members as an ad hoc committee to investigate any matter.

Upon the completion of the investigation, the committee will issue recommendations and ensure changes are implemented to improve Jersey City’s and SUEZ’s emergency preparedness and response for similar events in the future.

Mayor Steven Fulop had floated the possibility of cancelling Suez’s contract in light of the storm, but that option does not appear to have moved forward yet.