Hudson County Board of Commissioners Chair Anthony Vainieri (D-8) has the support of all 12 local mayors, along with County Executive Tom DeGise and his daughter, Hudson County Democratic Organization Chair Amy DeGise, to lead the county’s local Democratic party. 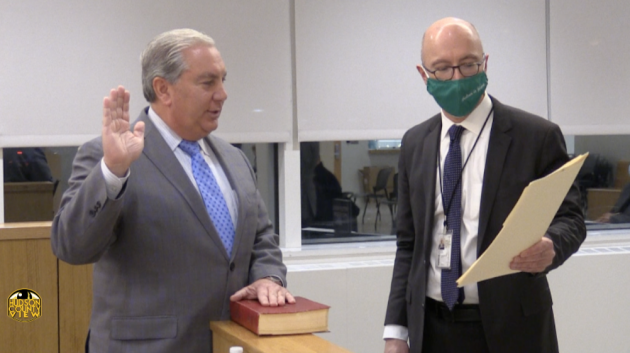 “As an active Democrat and a member of the HCDO since I was 18 years old, it’s an honor to have the opportunity to lead this organization. Hudson County needs to be united so we can be a leader on the state level and continue to deliver for the residents we serve,” Vainieri said in a statement.

“As Chairman I promise to work just as hard as I have on the County Commission Board to make our party stronger, to forge consensus with the mayors and other county leaders, and to move Hudson County forward. I would like to thank the mayors and other leaders for their endorsement, especially my own Mayor and State Senator Nicholas Sacco.”

The HCDO will hold its leadership election following the Democratic Primary in June and Vainieri now looks tough to beat about two weeks after his potential candidacy leaked, along with the possibility of Tom DeGise’s chief of staff, Craig Guy, succeeding him.

“I’m so proud of the progress our party has made in the last four years strengthening our commitment to our local communities and becoming a stronger presence in every municipality,” added Amy DeGise.

” … In recent weeks it has become apparent that we have more battles to fight on a statewide level to push back against forces that would prefer to see Hudson divided, and I’m confident that Anthony Vainieri is the best choice to take on that challenge and advocate for what our communities need.”

DeGise was elected chair in 2018, upsetting state Senator (D-33)/Union City Mayor Brian Stack after they announced they would try to oust Tom DeGise. Her two-year term was extended to four due to the COVID-19 pandemic.

Since then, cooler heads have prevailed Amy DeGise ran with Fulop in November and got elected to a Jersey City council-at-large seat.

“Keeping Hudson County politically unified is an important goal that I share with the other mayors and local leaders, and I’m excited to work with Anthony Vainieri to make that happen,” explained Fulop.

“I would like to thank Chairwoman Amy DeGise for her hard work over the last four years to move our party forward, and I know that she will continue to be an important advocate for Jersey City and all of Hudson County as a member of the City Council.”

Hudson Dems rally for Menendez, who takes aim at Hugin, at...