Union City officials are expressing regret across the board for having a former actor known for his roles in “A Bronx Tale” and “The Sopranos” speak at the high school earlier this week due to his involvement in an NYPD cop’s murder in 2005.

Lllio Brancato, who served eight years in prison for his role in the 2005 murder of NYPD Officer Daniel Enchautegui, was the featured speaker for a “Substance Abuse Awareness Assembly” hosted at Union City High School yesterday afternoon.

The event was a joint effort between the Union City Board of Education and the New Jersey Reentry Corporation, according to a flyer for the event.

Since then, outrage has broken out on social media over Brancato’s past, leading to various Union City officials to publicly denounce the decision to have the actor speak at a public venue.

“Lillo Brancato Jr. may have overcome the odds as a former substance abuser, but he is also a murderer. On December 10th, 2005, he murdered a police officer,” the Union City Fraternal Order of Police Lodge 216 and Patrolmen’s Benevolent Association Local 8 said in a joint statement.

“Both Union City Police Unions stand by our brothers in the New York Police Department and continue to morn the loss of NYPD Police Officer Daniel Enchautegui. Substance abuse is a serious matter; and there is a multitude of well-known, well-spoken and powerful speakers who could have given presentations on the issue.”

According to The New York Times, Brancato was charged with felony murder in connection to the officer’s death, but was acquitted of that charge and convicted on attempted burglary.

In their own statement, the Union City BOE issued an apology for having Brancato speak, noting that they did not condone his past actions and that he was not paid for his appearance.

“Clearly, the decision to invite Lillo Brancato was a mistake,” they began.

“In hindsight, we should have been much more sensitive to the feelings and concerns of the New York Police Department, our own Police Department, and police departments across the country. We apologize to everyone who is offended by our decision and rest assured, it will never happen again.”

Additionally, Union City Mayor Brian Stack said he was “disappointed” that the BOE recruited Brancato to speak at the event, calling him a “horrible choice” and stressing his continued support for the men and women in blue.

Stack and Brancato were among a laundry list of speakers who participated in an annual reentry conference at St. Peter’s University last year, according to a flyer from the event.

Brancato, is well known for playing the lead role of Calogero ‘C’ Anello in 1993’s “A Bronx Tale,” later earning a reoccurring role on The Sopranos in 2000.Â He was released on parole on December 31st, 2013.

A representative from the New Jersey Reentry Corporation could not immediately be reached for comment this morning. 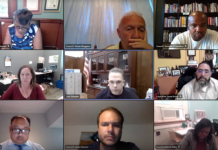