The Cannabis Place dispensary is partnering with Ukrainian Jersey City to donate mortuary bags to properly bury victims of the Russian invasion of Ukraine. 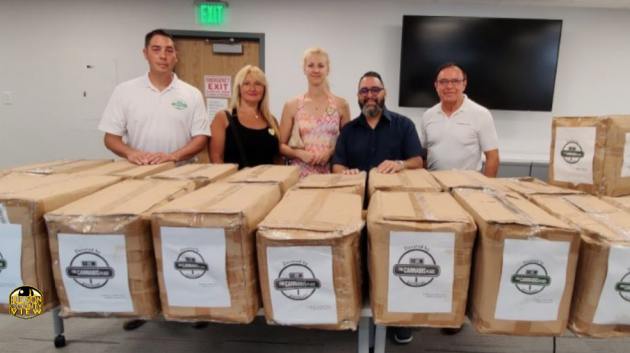 “This is something that caught our attention recently when we read a report from Human Rights Watch that there is a need, a critical need, for mortuary supplies like these. Unfortunately, the invasion of Ukraine continues, and the people of Ukraine continue to suffer and continue to be killed,” dispensary owner Osbert Orduna, also a combat veteran, said today at Jersey City City Hall.

“There’s a critical need for mortuary bags. It allows folks to be buried in a dignified manner. These innocent civilian victims … are forced to wrap up their loved ones in whatever. With these bags, it provides for a dignified burial.”

Orduna also noted that the alternative cremation process creates smoke, which could be a target for a bombing attack.

The cannabis business, officially licensed as Cannabis Place 420 Corp., was approved at the last Jersey City Cannabis Control Board meeting to operate an adult-use cannabis dispensary in Greenville.

Hudson County Clerk E. Junior Maldonado was one of the audience members in attendance to support his application.

“Ukraine is in dire need of these materials. This is a big donation being made by Cannabis Place. Ukrainian Jersey City is going to get it there,” Maldonado said this morning.

This is a great gesture that The Cannabis Place is doing. Osbert, thank you so much. Ukraine is having problems with supplies. The fact that the Cannabis Place is willing to give this donation really means a lot,” added Councilman-at-Large Daniel Rivera.

“What’s going on is a tragedy. It’s against civilians, it’s against mothers, children. All of our families are there. It’s just very hard for all of us. Since February 24th, we are very anxiety prone. Our lives have changed,” she explained.

” … We don’t have lives because the only thing we do 24/7 is think of Ukraine and the Ukrainian people. We try to do everything we can for them. This takes a weight off our chests. This is so needed. There are so many more things that are needed.”

She also indicated that the donated items they receive go in suitcases with people who are traveling to the Ukraine since shipping items by themselves could take around six to eight weeks to arrive.

Furthermore, Syby said they send individuals with about 100 checked suitcases a week with outfits, shoes, flashlights, medical kits, tourniquets, and food for the soldiers fighting Russia.

They have largely sent clothing for male soldiers, but since they are many women fighting for Ukraine now, they are shifting to helping them as well.

For the moment, they have to check 100 bags of luggage, and it costs over $40 to check each one.

“We have to raise money to pay for the bags. It’s a lot of money, but it’s the only way to get it there as soon as possible,” Syby added.

Syby translated for Liudmyla Holovko, a Ukrainian refugee who arrived in March, and said, “Thank you all for thinking of Ukraine. With your help, it’s making the war go quicker for Ukraine.”

Holovko arrived in Jersey City with her daughter, while her husband and family remain in Ukraine.

“Whatever you need from us to succeed for our company, we’re there for you,” Syby replied.

Orduna noted they have already donated to several community organizations, including food pantries, during the Omicron COVID-19 surge in January.

“We’re doing our part to make a difference, as small as it might be, it might inspire other cannabis businesses, much larger companies, for example, to do their part for those in need,” he explained.

Prior to receiving CCB approval, Orduna’s application had cleared the planning board. Therefore, he is ready to have a resolution granting him local approval voted on by the city council.

Like many others, The Cannabis Place applied for a state adult-use cannabis dispensary license when the portal opened in March and is waiting to hear back from NJ Cannabis Regulatory Commission.