The tensions continue to escalate in the ongoing feud between Suez Water and Hoboken officials, with Mayor Ravi Bhalla threatening to sue the company if continued water main breaks are proven to be the result of “Suez’s mismanagement of our water main system.”Â 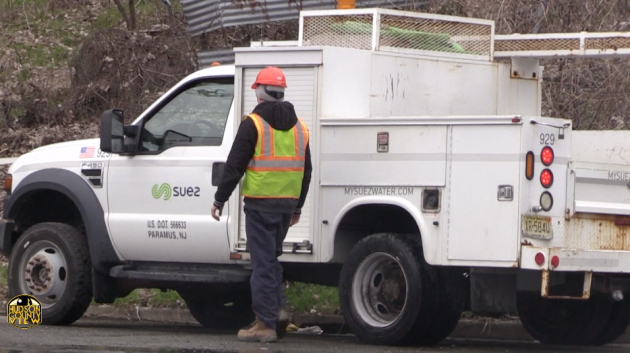 Bhalla and Suez have been going toe-to-toe more often and more aggressively in recent weeks, as water main brakes, already commonplace in the city, have been getting increasing larger and more frequent.

At a press conference today, the mayor called for an internal investigation into Suez, working with the city council to potentially put Suez’s services out to bid again and even filing a lawsuit if the city can prove the breaks are “the result of Suez’s mismanagement of our water main system.”

2nd Ward Councilwoman Tiffanie Fisher, the chair of the council’s infrastructure subcommittee, added that she is on board with putting services back out to bid, as well as suing Suez – under the right circumstances.

“I’m on board with putting services out to bid to get the best terms for Hoboken, and supports legal action as a potential remedy if it is determined that the actions of Suez caused the recent breaks,” she told HCV.

Suez spokesman Richard Henning didn’t take the criticisms lying down, noting that some of the water pipes used in Hoboken are over 100 years old and that Hoboken electeds who try to pass the buck won’t succeed in the long term.

“Hoboken’s water infrastructure is over a century old in many places, and unless Mayor Bhalla stops pointing fingers and starts investing in the system the problems residents are facing will continue to get worse, not better,” he said.

“The City of Hoboken owns the system and is ultimately responsible for making investments necessary for improving it, and Suez has proposed making major investments into it several times in the past only to have the city continue to neglect its infrastructure needs.”

Henning added that Suez is committed to replacing “these functionally obsolete pipes” and hopes that Hoboken will follow suit, instead of filing “an unnecessary lawsuit.”

To add insult to injury, a massive water main break occurred near the Hoboken PATH Station around 6 p.m., marking the ninth one this month (though Suez says that dating back to 2001, Hoboken averages about seven water main breaks in August).

Another massive water main break near the Path Station. This confirms the @CityofHobokenâ€™s concerns about @SUEZwaterNJ. Residents donâ€™t deserve this and we are now even more determined to execute our plan announced earlier today. pic.twitter.com/S4a0osOuVt

Even without ballot question, Hoboken mayor and council still working on...