As of 4 p.m., about 2,000 residents have voted in the special election to select a 1st Ward councilman, according to sources with knowledge of the situation.

That number likely means that approximately 3,000 to 3,500 voters will hit the polls before 8 p.m., while not a particularly high total, it exceeds expectations for an off election year where Hudson County Executive Tom DeGise is on top of the ticket against 18-year-old Republican challenger Kennith Gonzalez.

Last year, when U.S. Senator Bob Menendez (D-NJ) was on the ballot, Bayonne’s 16 districts in the 1st Ward combined for about 5,400 votes combined.

According to street operatives, both incumbent Neil Carroll III and Peter Franco have had robust ground operations and campaign literature to remind 1st Ward voters not to forget about the special election.

The winner of the race, which also features, John Cupo and John Hagdorn, will serve on the Bayonne council until June 30th, 2022.

In addition to the 1st Ward council race, Bayonne voters can pick three candidates out of a field of 14 to serve three year terms on the local board of education.

The polls are open until 8 p.m. 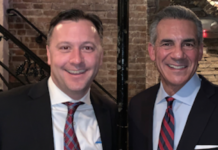