Some Jersey City residents expressed concerns over developing the former Harmon Street pool, which has been closed for about a decade, during a community meeting convened on Microsoft Teams last night. 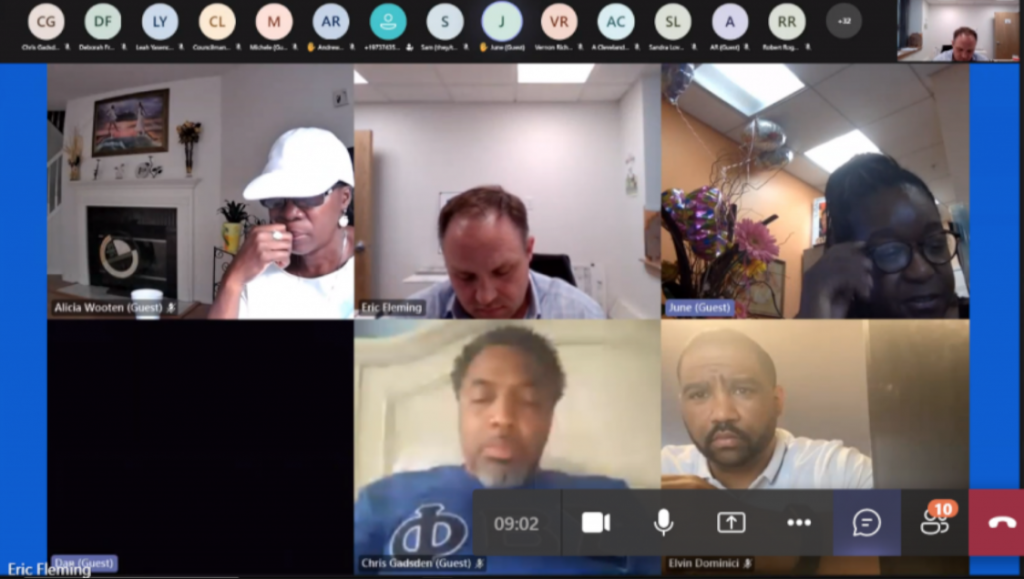 The city has contacted the New Jersey Department of Environmental Protection’s Green Acres Program to remove the former pool, located at 531 Communipaw Avenue, from the Recreation of Open Space Inventory to make way for a redevelopment project.

They would then replace it with land acquired for the Morris Canal Greenway.

Assistant Business Administrator Eric Fleming moderated the first of two meetings that will be held on the issue last night.

“No member of the community asked for this … Are we just going to turn it over to a developer with no strings attached?,” said Andrew Russo, of the Park and Prescott Neighborhood Association.

He said it is common for large development corporations to not include affordable housing, a parking garage, or similar community amenities in their project proposals.

“You better believe the second meeting will be different. You’re damn right the block associations matter around here,” he continued.

“We need to send a message to the city if there’s something we agree with we don’t like, we’re going to be heard. No one likes blight … but the city hasn’t maintained it.”

Russo also said it was disheartening to hear Councilman-at-Large Rolando Lavarro say there was an opportunity for the city to develop the Harmon Street pool with affordable housing or a community center, and they passed on it.

He continued that he felt is spoke volumes that Ward F council candidate Frank “Educational” Gilmore was on the call, while incumbent Jermaine Robinson was not.

“We were very instrumental in getting the pool,” said June Jones, the founder of the Morris Canal Community Development Corporation and a current at-large council candidate.

“This should not be considered a public meeting,” she added, arguing that the future of a major development was insufficiently advertised.

“No action should be done without the process of the community. I am requesting that there be an additional two meetings that will be considered the required meetings of the EPA.”

Chris Perez said he represented a business association between Ocean and Garfield and Bayside Park where people want green space.

“ … At the end of the day, we see that profits always go over … what is best for the community,” he began.

“Why do we have to go back to Greenville, which is actually an area that needs more of recreation and participation of youth in activities that takes them off the streets?”

Fleming responded that it is unlikely they would allow condos would be built because the land needs to be developed with the public good in mind.

Occasionally, there was a resident who spoke in favor of the city developing the property.

“This has been a blight on the neighborhood for many, many years. We could trade public space for multiple things,” Rob Greenwald said.

Alicia Wooten said Mayor Steven Fulop should have been on the call and questioned the definition of affordable housing used by developers in the first place.

“I take this process seriously, and I believe it’s important,” Fleming said, adding that the second meeting would likely be in October, and he would work to promote it.

Furthermore, at-large council candidate Chris Gadsden said a meeting needed to be held sooner if the application will be submitted in any form sooner than October.

“That application cannot be submitted at all because there has been insufficient community input with the community groups and the stakeholders here: We’ll help you advertise before you submit any application to the State,” he asserted after hearing that a pre-application may be submitted in August.

The logic was that if the second meeting is in October, residents would not be able to stop the pre-application, which will most likely want to redevelop it into a building versus a community amenity.

Fleming said that as a past president of the Harsimus Cove Association, he’s been on both ends of these calls, and said he would “talk with the powers that be” about holding an interim meeting.

Correction: An earlier version of this story erred in saying that Director of Diversity and Inclusion Director Soraya Hebron participated in the call.