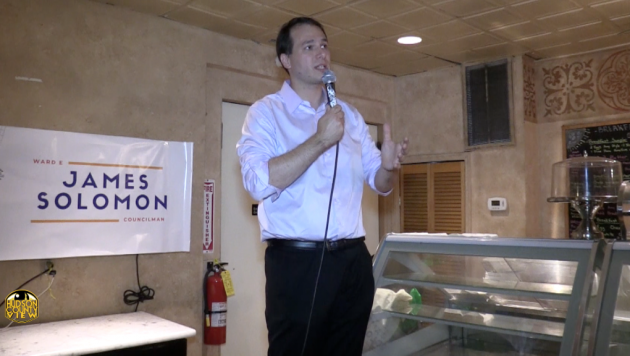 “Thank you all so much for your support to re-elect me to the City Council in Jersey City! I am eager to get back to work to push Jersey City to build a livable and equitable city…and that work will be much more fruitful if I am joined on the council by my friend Kevin Bing,” Solomon said in an email blast yesterday.

“As you may know, Kevin is running to represent Ward C and he faces a run-off election on December 7th. Kevin’s running a similar campaign as I did: proudly progressive and independent from the political establishment and real estate developers.”

Solomon won re-election in a blowout on November 2nd, besting Chief Municipal Prosecutor Jake Hudnut, who ran on Mayor Steven Fulop’s ticket, by a margin of about 69-31.

He won his first term in a December 2017 runoff.

While Frank “Educational” Gilmore pulled off a big upset in Ward F, defeating Councilman Jermaine Robinson by around 23 points, Fulop enjoys a 6-2 majority on the city council heading into the runoff.

Bing looks to unseat two-term incumbent Rich Boggiano, who ran independently in 2013 and 2017 before running with Fulop as he sought a third term.

“Your support will help us succeed and bring real change to Ward C. Note that proof of vaccination and indoor masking will be required for participation in this fundraiser,” Bing wrote on the event page, noting that it will be at a private residence at 1 p.m. on Saturday.

Tickets start at $100 per person and Bing said earlier this week that he had raised $13,000 since the runoff race started.

Hudson County Republicans will hold reorganization meeting at The Boulevard on...