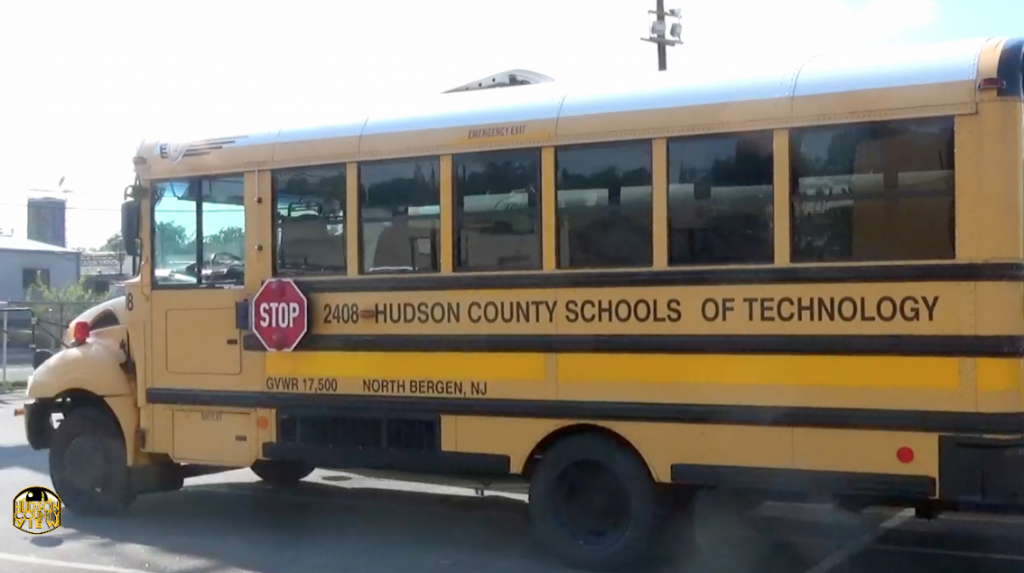 Just prior to 4:00 p.m. yesterday, the Hudson County Sheriff’s Office received a report of a Hudson County Schools of Technology bus involved in a crash on Paterson Plank Road and Columbia Avenue in North Bergen, Schillari said in a statement.

W”hen my officers arrived on the scene, they found a white Toyota Camry, driven by Pascual Caba, of New York, NY, spun around under a traffic light pole that had fallen on top of his car,” he explained.

“Additionally, my officers found a Hudson County Schools of Technology bus, driven by Maria Diaz, of North Bergen, lodged into the front of a home on Paterson Plank Road. In addition to the driver of the bus there was a bus aide and two school children ages 10 and 9.”

He continued that North Bergen EMS evaluated everyone involved at the scene and Caba was transported to the hospital after suffering relatively minor head and neck injuries, while all others refused medical attention.

The Hudson County Sheriff’s Crash Unit is currently working on determining the cause of this incident.

” … I would like to thank the quick response of my officers, North Bergen EMS, and Hudson County Signal Division to care for everyone involved and make the roadway safe,” Schillari added.