The five Hoboken City Council candidates have pledged to “stamp out voter fraud” by not paying any campaign workers on Election Day, with 1st Ward Councilman Mike DeFusco responding that is “absolutely absurd” given outside money coming to the race. 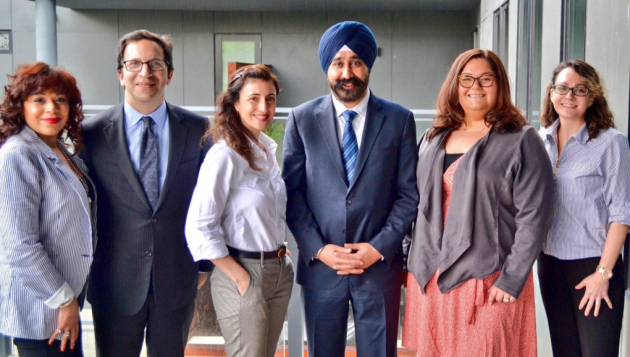 The Team Bhalla Council slate today pledged to not hire any election day workers, relying on volunteers to conduct get out the vote (GOTV) activities and challenged all candidates running for Hoboken council to do the same.

According to a joint statement released by Migdalia Pagan-Milano, Nora Martinez-Debenedetto, Lisa Sprengle, Phil Cohen and Cristen Cricco-Powell, this initiative is in response to longtime politico Frank Raia being convicted of running a vote-by-mail fraud scheme in 2013.

“We are pledging not to hire any election day workers because we believe it is important to go the extra mile to stamp out the voter fraud that has plagued our local elections,” the team said.

“We challenge all candidates running for Ward Council seats this fall to join us. It is important to send a message to all residents that Hoboken elections will be conducted with integrity.”

The pledge includes denouncing GOTV efforts that pay workers, no campaigning on HHA property, donating away all monies received from Raia and related entities, as well as holding other candidates running to the same standards.

1st Ward Councilman Mike DeFusco, who is seeking re-election in November and donated $9,400 in campaign contributions from Raia following his conviction, was not amused by the pledge, noting that it’s disingenuous given that the opposition slate will accept “dark money” in this election.

“It’s absolutely absurd for a slate of candidates to preach about running a clean campaign when they’re being supported by a dark money super PAC poised to spend over $150,000 to influence our local elections,” DeFusco said in statement.

“That kind of disingenuous pandering is exactly what’s wrong with politics today and another reason why our city must have independent Council members who are accountable only to the people of Hoboken, not their dark money benefactors.”

As only HCV has reported, a new super PAC incorporated on July 29th, NJ Community Initiatives, is poised to get involved in the November 5th Hoboken municipal elections.

According to their incorporation papers filed with the New Jersey Election Law Enforcement Commission, the group estimates raising $150,000 this calendar year, approximating that $100,000 will be spent on “New Jersey election-related activity” in 2019.

No one connected with the PAC has confirmed or denied where they will be spending money this election cycle as of this writing.

In response, Team Bhalla spokesman Rob Horowitz took another shot at DeFusco for attempting to change the subject.

“Given that one of Mike DeFusco’s largest political contributors was Frank Raia, found guilty of being the mastermind of the voter fraud scheme, and that his former campaign manager Ryan Yacco was at the heart of the scheme, you would think he would sign-on to this straightforward pledge to protect the integrity of Hoboken elections, rather than try to change the subject,” he said.

Ashe-Nadrowski discussed plans for responsible development in Bayonne at meet and...