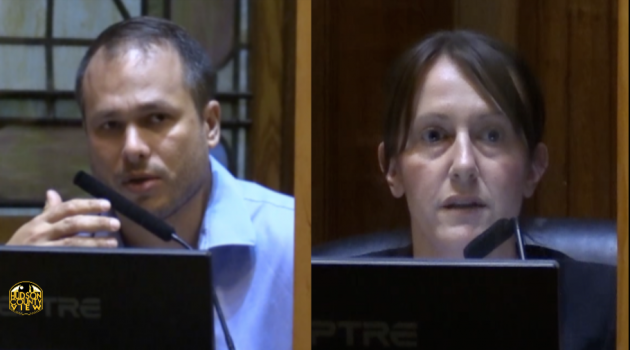 “I am horrified by the video showing Councilmember DeGise’s hit-and-run crash. Leaving the scene of a crash is illegal. Doing so demonstrated a callous disregard for the life and health of the victim she hit,” Solomon said in a statement issued this morning.

“Public servants must be held to a higher standard. While Councilmember DeGise is entitled to forgiveness and her day in court, both should come as a private citizen. She should resign. If she fails to do so, she should be recalled.”

Solomon is the first public official to call on DeGise to resign for the incident, which shows her hitting an Uber Eats bicyclist at about 8 a.m.

DeGise did not stop or appear to hit her brakes after she hit Andrew Black, who seemingly ran a red light, at the intersection of Martin Luther King Drive and Forrest Street, CCTV footage shows.

The councilwoman-at-large ran on Mayor Steven Fulop’s ticket in November and has said little about the incident beyond that she is glad no one was seriously injured, declining to comment further due to her pending court case.

On Monday, Fulop said on NJ Spotlight News that it is never acceptable to leave the scene of an accident, as well as that the CCTV footage should be released as soon as possible, while DeGise still deserved due process.

In the event that a recall should occur, it would have to wait until at least January since a New Jersey public official cannot be recalled until they hold office for at least one year.