Many Jersey City residents again called for defunding the police after the amended $568 million budget offered few cuts to the police department, while other city services weren’t as lucky. 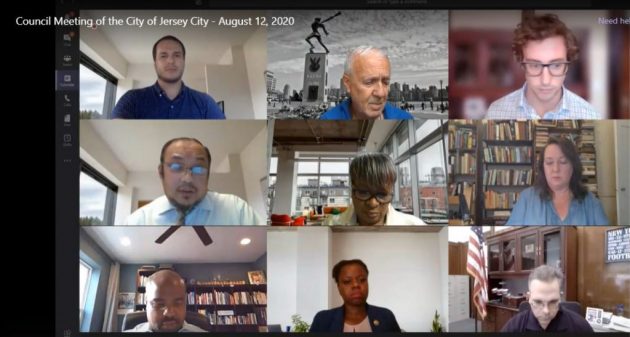 The meeting was another lengthy one, over seven hours in total that had public comment stretch for more than three hours.

Members of the activist group Solidarity Jersey City criticized the fact that while the JCPD budget is receiving a six percent cut, other departments are receiving far more drastic ones – while an agenda item still called for the hiring of 23 new police officers.

Many also criticized a measure to permanently station police in public housing and called for a 50 percent budget to the JCPD.

“How can you justify cutting police funding by six percent and children services by 42 percent?” asked Elayna Thompson.

Thompson said while a 50 percent cut to the police might seem radical, “It is radical slashing the budget of health and human services in the middle of a pandemic.”

Many others pointed to the same statistics when criticizing the 2021 budget.

“You’re pouring money into a faulty institution that’s failing to do its job to protect the community. I think it’s a shame that the city can only spare 6 percent for police while Youth and Recreation takes a 42 percent hit and Health and Human services get cut 11 percent,” said Andrew Zhang.

“A city that truly cares about its people would not hire cops to make people scared in public housing,” Zein said.

“That’s money that belongs to the people of Jersey City  that could have been spent, for example, on rent relief for people who can’t afford it.”

Not everyone criticized pro-police measures.

“I applaud the mayor for hiring the police. A Pew poll said 81 percent of African Americans want more police,” said Yvonne Balcer. She also criticized the higher property taxes in the wake of the assessment of homes that increased in value.

Balcer was not the only speaker who vocalized support for the local police force.

“Our current JCPD is underfunded,” stated Barbara Camacho. “Black and Brown South Side residents want to feel safe too.”

Gary Spingarn said the Pew poll was a web poll not based on scientific principles like those conducted and publicized by research organizations.

“This budget prioritizes property owners who are only one out of three residents,” said Marc Devens, as a member of the Hudson County Progressive Alliance.

“Police are the front guard of gentrification. We’re asking you to prove you’re really for the well-being of all Jersey City residents.”

Mike McQuade, who identified himself as a Ward F resident for five years, was another speaker who said he agreed with the sentiment that the JCPD budget should be cut by 50 percent.

“In wake of the police murders of George Floyd, Breonna Taylor, and Elijah McClain, and the subsequent protests that have occurred in our city, I am deeply disheartened to see Jersey City attempt to expand the resources and scope of our police department.”

Jersey City Anti-Violence Coalition Movement Executive Director Pamela Johnson noted that she’d like to see the city’s black leaders push for sustainable change, which could start with a Civilian Complaint Review Board.

When it was finally time for the council to make their remarks on the agenda, James Solomon, the Ward E representative who challenged Mayor Steven Fulop on the new police hires, expressed some disappointment with the budget process to date.

“While I understand that covid has altered our timelines, this budget is supposed to belong to the city council, and to date it has not, but I am hopeful that will change in the coming weeks,” he began.

” … The council is supposed to introduce the reintroduced budget, in this case it was the administration that introduced it: that had full and total control of what we see today. My hope is that the council is now going to form a committee, we are going to review this amended budget, get all of our feedback, and potentially make real changes to it.”

Solomon continued that the current spending plan was rife with “budget gimmicks” to ensure there are no tax increases, noting that there is no funding for things such as accumulated absences, with $12 million coming via land sales, and emphasized that he wants to see more funding allocated to community-led anti-violence programs.

“I genuinely think this budget is a mistake and it’s going in the wrong direction and I had to say it.”

Furthermore, Ward F Councilman Jermaine Robinson was the first council member to come out and say he doesn’t support defunding the police.

“I know a lot of people have called for the defunding of the police department, but I say it over and over again: I represent the part of the city that has most of the homicides in the entire county and if you really look at it, we have a 16 block stretch … that may be one of the most challenging stretches in the entire county – if not the state,” he began.

“We have so many complaints, I do hear the concerns of citizens, trust me I hear it, and I hear the defund the police, but every day I’m called to a block that’s looking for a cop. Every single day.”

From there, Councilman-at-Large Rolando Lavarro said he agreed with Solomon in investing city funds in community initiatives, also pointing out that over 80 police officers are eligible for retirement this year.

With that in mind, he plans on introducing a budget amendment at a later hearing that will take the money from those retirement savings and “reinvesting in our communities.”

Councilman-at-Large Daniel Rivera said, like Robinson, he was not keen on altering the police budget.

“Putting social workers in place of police officers … I don’t know if that’s facts that’s coming from our city council. I really hope that it’s not … I go to almost every murder scene that happens in the City of Jersey City … the fabric of the Jersey City Police Department is not how people are making it sound.”

Both the resolutions introducing the budget amendments and requesting funding for the new police hires were approved by votes of 7-2, with Solomon and Lavarro voting no.