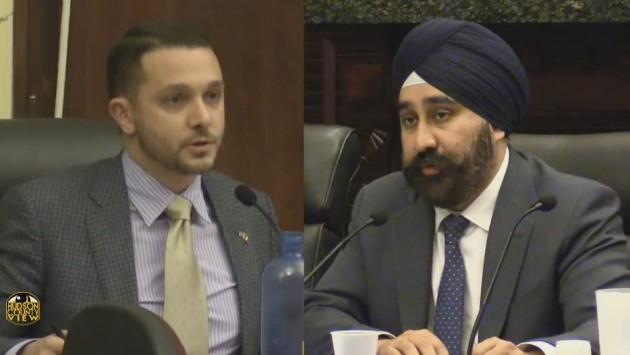 “Terrible – I went through this same racist nonsense right before my election. I stand with you Andre Sayegh!,” Bhalla tweeted after TapIntoPaterson broke the news that a flyer using racist and homophobic language supporting Sayegh hit the streets late Saturday night.

“Is [sic] time for the Christian silent majority to make Paterson great again! Vote Andre Sayegh for Mayor,” the campaign literature says below photos of former officials with the descriptions “s***,” “n*****, “f**” and “Muslims” – claiming “they have all run the city to the ground.”

In response, DeFusco sent an angry tweet in Bhalla’s direction, questioning why he is yet to clear his name six months after the infamous “Don’t let TERRORISM take over our town!” flyer hit the Mile Square City.

“Great that you’re supporting @andresayegh during tough time, I am too. I know what it’s like to be falsely labeled a racist in a campaign and it’s awful. Would have liked to have your support then, or any time since as situation still isn’t resolved six months later,” he wrote.

Back on an episode of Hudson County Review Live in December about a month after Bhalla was electedÂ  mayor, he made some of his only public comments as to why he has been unwilling to support DeFusco on this issue.

“I do feel very bad for family members of Councilman DeFusco, I believe his sister have been strained or called names by members of the public because of this situation … that adds more harm to the incident itself. So I do sympathize with that, but it’s really important for us to let the police do its job and respect the investigation as it takes its course.”

Bhalla also said during the interview that he believes that DeFusco offering a reward for any information on the suspects is “arguably interfering with an ongoing investigation,” since the state police, not private citizens, are typically in charge of offering rewards – which are typically reserved only for violent crimes.

The mailer that advocated for Sayegh, whose in a six-way race for mayor – just like Hoboken was late last year – has a paid for line from the Bayonne-based “Progressive Values Committee.”

The super PAC has since denounced the flyer and any involvement with it.

In DeFusco’s case, the terrorism campaign literature had his paid for line on it, forcing him to fend off accusations of being a racist in the last few days before the election – where Bhalla bested him by a little over 400 votes.

In a much longer Facebook post, the councilman added that “This latest incident underscores the need to continue the investigation into the fliers in Hoboken until a culprit is found, because our democracy is at stake when elections can be swayed like this.”

“Until we start holding people accountable for these despicable and illegal campaign techniques, I fear that we will see more and more of this kind of nefarious activity.”

In an emailed statement, Bhalla reiterated that whoever is behind the flyer needs to be “brought to justice” and he’s done talking on the subject until law enforcement has an update in the case.

“I hope whoever is behind these fliers is brought to justice and Councilman DeFusco finds the absolution he needs to finally focus on positive solutions for Hoboken. I would be happy to counsel him on how to move on from libelous accusations like, for example, being called a terrorist,” the mayor said.

“For the sake of Hoboken residents, I hope he joins the rest of us in 2018. Until there are any tangible breaks in the investigation, this is the last I will say on the matter.”

Even with the aid of the FBI and the U.S. Secret Service, the Hoboken Police Department is yet to make any arrests in the case, though Police Chief Kenneth Ferrante said in February that suspects are still being interviewed – some of which haveÂ  retained lawyers.

In an email, Ferrante said the investigation is ongoing and he remains confident that arrests will be made eventually.

“Our investigators are still following all leads and continue to interview individuals. I will not state if we are close to arrests or if we have any new leads as that could hamper the Investigations Bureauâ€™s work. This case will remain open until investigators feel that they hit a 100% dead end,” he said.

“Someone knows those five individuals who disseminated the flyers and who put them up to it, and I feel some day, someone will finally come forward if our investigators donâ€™t get to them first. With individuals knowing who put those flyers in the disseminatorsâ€™ hands, at some point someone will give up this information. We have had many that have come forward with third party information.”

Ferrante also urged anyone with any information to “come forward to any law enforcement agency” or “file suit against those that they supposedly feel certain committed this horrible act.”

Editor’s Note: This story has been updated with comments from Mayor Bhalla.Â