Assembly Speaker Vincent Prieto (D-32) has formally announced that he plans on seeking his third, two-year term in the leadership position. 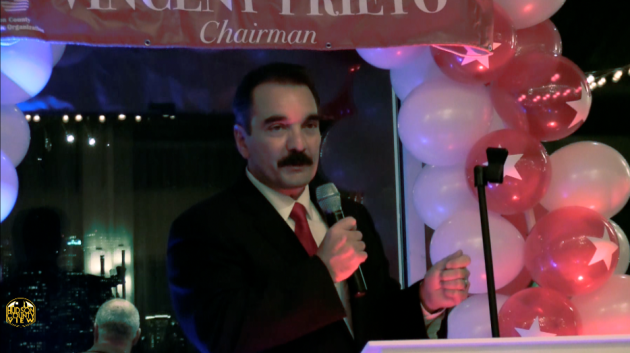 “Over the past three and a half years that I have served as Assembly Speaker, I am proud to say that I have put together a strong record of fighting for progressive values and ideals, no matter who may have been standing in the way,” Prieto said in a statement.

“Working together with the members of our caucus, we brought needed funding to the Transportation Trust Fund, fought to protect collective bargaining rights, increased the minimum wage, passed historic bail reform and took many other actions that will benefit our residents for years to come.”

Prieto, who has served in the Assembly since 2004 and is also the Hudson County Democratic Organization chairman, is up for re-election this year and appears poised to cruise to victory with no Democratic challenger on the ballot.

He also has the backing of Democratic gubernatorial frontrunner Phil Murphy.

“Most importantly, we brought the Assembly back into the conversation in Trenton and re-established it as a co-equal branch of our state government. I am proud of that record, but with so many important priorities left to fulfill I believe that there is far more work to do,” Prieto added.

He further stated that he is confident he will have the caucus votes to retain the speakership when nominations are made.

While Prieto’s re-election to the lower house is not in jeopardy, he will inevitably face opposition in retaining the speakership from South Jersey politicos, particularly state Senate President Steve Sweeney (D-3).

Assemblyman Craig Coughlin (D-19) is said to be the preferred choice over Prieto from a South Jersey perspective.

Bayonne BA Mathews resigns instead of taking her prior clerk position...