A woman was arrested in Jersey City after Port Authority police saw her vehicle swerving and bounce off the Holland Tunnel wall, described as “slobbering and slurring over her words” before falling over during the field sobriety test, authorities said.

Port Authority police observed a 1999 black Toyota Camry swerving and bouncing off the Holland Tunnel wall while traveling westbound in the north tube of the tunnel at 5:30 a.m. on Saturday, officials said.

An officer pulled the vehicle over near the intersection of 14th Street and Marin Boulevard in Jersey City, noting the suspects eyes were “glassy and glazed” with a strong smell of alcohol coming from the car, police said.

During the field sobriety test, police said Jugo “swayed back and forth,” was “slobbering and slurring her words” and ultimately, the test was stopped for her safety after she fell over, stated Pentangelo.

Jugo became uncooperative after being place under arrest, refusing to take the breathalyzer test, authorities said.

The woman, who has an amateur boxing background, was forced to stay over night at Hudson County jail in Kearny after an active warrant out of Weehawken showed she was wanted for bail jumping, police said. 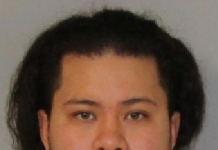