A Secaucus couple was arrested last week after being caught with illegal handguns and a shotgun, as well as illegal narcotics and prescription drugs, police said.

Additionally, Grossi’s girlfriend, Jessica Skinner, 27, also of Secaucus, was charged with possession of a defaced firearm, three counts of possession of a controlled dangerous substance, possession of drug paraphernalia and tampering with physical evidence, officials said.

On May 12, at approximately 2:53 p.m., Police Officer Joseph Fuardo was investigating a suspicious vehicle on the 700 block of 3rd Street in Secaucus. The vehicle was parked and unoccupied, but all its doors were left ajar, authorities said.

In plain view, the officer noticed a loaded semi-automatic handgun in the vehicle. The loaded handgun was recovered and later found to be reported stolen from North Carolina, police said.

A search of the vehicle uncovered a loaded shotgun along with numerous rounds of handgun/shotgun ammunition, as well as a quantity of suspected methamphetamine, suspected alprazolam and suspected endocet, officials said.

â€œThere is no doubt in my mind that Officer Fuardoâ€™s diligence made Secaucus a little safer by getting these guns off the street,” he said in a statement. 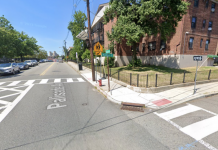 Police: Pedestrian ‘felt herself in the air’ after being hit by...