A Jersey City man attacked a Bayonne Walmart employee with a baseball bat in the store parking lot last week for reasons that were not disclosed to authorities, police said.

Alfonso was arrested around 10:05 p.m. on Thursday after attacking a 24-year-old Jersey City man with a baseball bat in the parking lot of the Bayonne Walmart, located at 500 Bayonne Crossing Way, authorities said.

Officials said the situation escalated after the victim had a verbal altercation that included Alfonso’s wife and daughter. Both the victim and Alfonso’s daughter are employed at the Walmart.

The exact cause of the altercation is unknown and the victim refused medical treatment after getting hit in the head with the bat, police said. 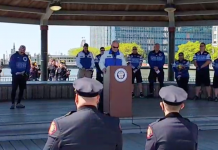 Jimenez: Trump wants to ‘instill fear in the Latino Community &...