A lawsuit has been filed against the New Jersey State Division of Criminal Justice and its Open Public Records Act custodian, claiming it illegally denied a records request pertaining to the Hudson County Prosecutor’s Office Director of Investigations Gene Rubino. 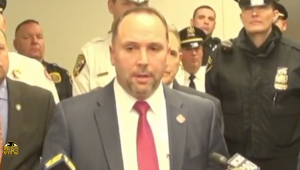 The lawsuit claims that Allende wrote a letter “denying Prosecutor Suarezâ€™[s] request that [Rubino] serve as Chief of Detectives because he had not completed a Police Training Commission approved training academy.”

Rubino, who has worked for the prosecutor’s officer since 1996, was made Chief of Investigations in November 2016 and had previously served as the acting chief.

In February, Hudson County Prosecutor Esther Suarez announced Rubino’s title had been changed to director of investigations after the state had stripped him of his title of chief of detectives.

The New Jersey Division of Criminal Justice, as originally reported by Real Jersey City, decided that Rubino did not have the qualifications to hold the title of chief of detectives because he had no completed a Police Training Commission (PTC) approved course for county detectives or police officers.

When reached for comment, Rubino directed all inquiries to HCPO spokesman Ray Worrall.

â€œThe Office of the Hudson County Prosecutor has not had an opportunity to review the referenced lawsuit. To our knowledge, this Office is not a named party in this litigation. As such, we have no further comment at this time,” Worrall said in an email.

The suit details that Rubas had field an OPRA request in July seeking the email correspondence from Allende, as well as any other communications, pertaining to Rubino’s employment qualifications.

NJ Division of Criminal Justice OPRA custodian Lt. Edward Augustyn denied the request “on the basis that the documents sought were personnel or pension records … and work-protect[ed] privileges,” the lawsuit says.

Rubas’ suit claims the denial was illegal and that the court “should grant access to the records pursuant to the common law right of access.”

Editor’s note: This story has been updated with a comment from Hudson County Prosecutor’s Office spokesman Ray Worrall.Â