Former Bayonne Assemblyman Jason O’Donnell and outgoing Jersey City Board of Education Sudhan Thomas have both vowed to fight their respective corruption cases brought forth by the New Jersey Attorney General’s Office. 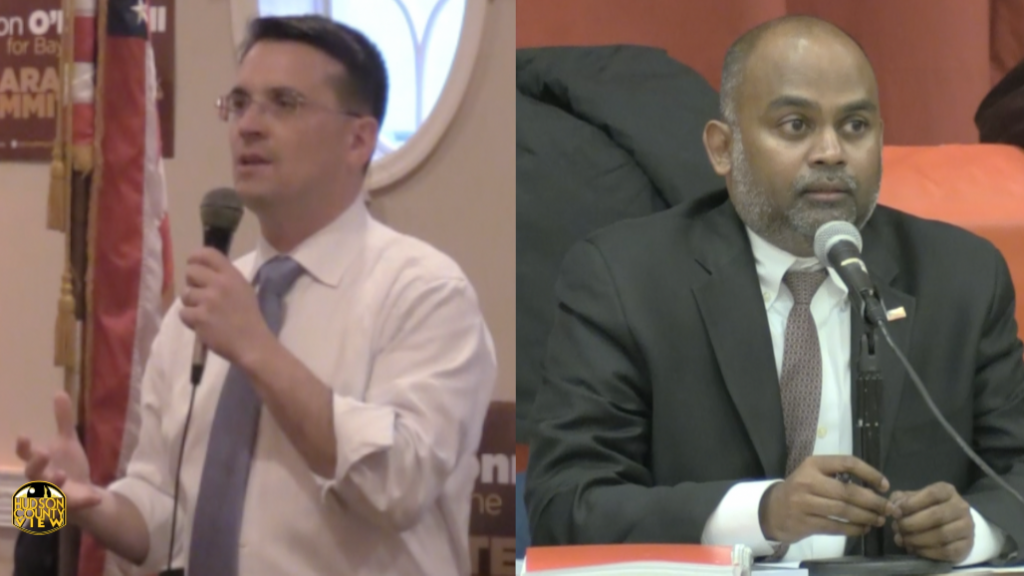 “Jason O’Donnell has dedicated his life to serving his community, has always conducted himself in a manner that makes his family and friends proud, and has consistently and vigorously fought for their best interests,” Leo J. Hurley Jr., the attorney representing O’Donnell, told HCV in an email.

“He intends to contest these allegations with equal vigor and to enter a plea of not guilty to the charges against him.”

Oâ€™Donnell allegedly solicited $10,000 in â€œstreet moneyâ€ for his unsuccessful 2018 mayoral campaign from the cooperating witness, who has been identified as tax attorney Matt O’Donnell (no relation).

In return, Oâ€™Donnell allegedly agreed to provide the cooperating witness with tax work from the City of Bayonne if elected mayor.

After the cash was handed over, they allegedly had the following exchange:

In a statement, Assemblyman Nick Chiaravalloti (D-31), O’Donnell’s successor, commended the AG’s office for fighting corruption, but stopped short of jumping to any conclusions.

â€œPolitical corruption undermines our collective faith in the system. I commend the Attorney Generalâ€™s Office for continuing the fight against corruption in our state. Whenever I read these kinds of stories, I am filled with anger, disappointment, and sadness,” he said.

“As this unfortunate situation continues to unfold, I keep in my thoughts all those affected, including the families of the accused.â€

Meanwhile, Thomas, who lost a re-election bid in November, insisted he was innocent and said his case was an example of New Jersey Attorney General Gurbir Grewal’s political ambition.

“I am not guilty and will be vigorously fighting the charges not just to prove my innocence, but the massive cover up this AGâ€™s office has embarked on in support of his political ambition bankrupt of every day American values,” he said in a statement.

“This Attorney Generalâ€™s Office has targeted me because I was the first school board President to sue the state of New Jersey under Democratic Leadership for the over $2.1Â  billon New Jersey owes the Jersey City schools which we undertook against all odds and threats to not undertake.”

According to the charges filed, Thomas was preparing to run for Jersey City councilman in 2021 at the time of his conduct. He allegedly accepted $35,000 in cash bribes, $10,000 delivered on one date and $25,000 delivered a second date, authorities said.

Back in January 2018,Â only HCV reportedÂ that Thomas had opened a new account with the New Jersey Election Law Enforcement Commission, though said the notion he was prepping for a council run was â€œfake news.â€

Thomas allegedly agreed, in return for the cash payments, to arrange for the cooperating witness to be hired as a special counsel for the Jersey City Board of Education.

During a conversation about the cash payments before they were delivered, the cooperating witness and Thomas allegedly had the following exchange:

Furthermore, Thomas also indicated that the Office of Public Integrity and Accountability, a part of Grewal’s office, want to “make an example” out of him due to his ongoing feud with former Gov. Jim McGreevey (D).

When Thomas was chair of the Jersey City Employment & Training Board on January 7th, they narrowly voted out McGreevey.

Since then, Thomas and a city spokeswoman alleged that a forensic audit revealed at least $5 million were misappropriated under McGreeveyâ€™s leadership and that the investigation had been turned over to â€œlaw enforcement,” which Thomas later identified as the U.S. Attorney’s Office.

Again, the former governor denied any wrongdoing and released eight audits produced at JCETP during his tenure as the head of the agency as proof that no malfeasance was ever committed.

Since then, JCETP Board Chair Stacey said in a court filing, as part of a whistleblower claim that names Thomas as a defendant, that the FBI is investigating the agency, as HCV first reported.

The FBI did not confirm or deny the existence of the investigation and Thomas was not explicitly named as a target.