Speaking to Hudson County View, NHRFR Chief Frank Montagne discussed the importance for the new captains and chiefs to demonstrate leadership, especially as the department recently hired 36 new firefighters and is expected to hire another 36 soon.

“Everyday they come to work, I want to make sure that they are looking at their membership and that their departments are running efficiently,” Montagne began.

“As leaders, with their new positions, their responsibilities have changed. So I want them to constantly train their men, be aware of their surroundings and run their departments as efficiently as possible.”

He added, “We already hired 36 about a year ago and soon we’ll have another 36, so we’ll have 70 members, or a third of our department with less than one year. That’s why supervision is critical. And the mayors and board members who attended today have allowed us to increase our supervision over the years; I can’t thank them enough for that support because without that it would be very difficult,” the chief also said.

The North Hudson Regional Fire and Rescue is made up of firefighters from five towns in Hudson County that used to have their own separate fire departments.

Back in 1999, the municipalities of North Bergen, Union City, West New York, Weehawken and Guttenberg decided to combine their individual departments into one entity to save taxpayer dollars and increase efficiency.

According to the department, the number of firefighters responding to fire alarms has increased since the combination almost 20 years ago.

The full 25-minute ceremony streamed live on our Facebook page and can be viewed below: 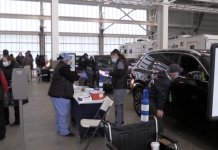